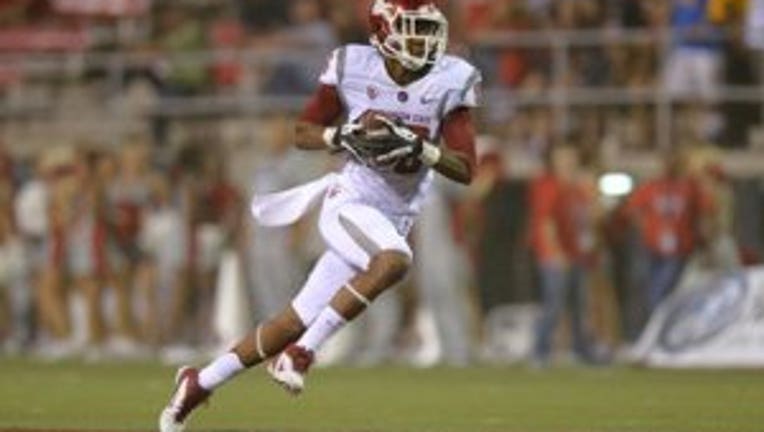 CHICAGO -- The Chicago Bears were seeking a downfield threat in the NFL draft and got a low-risk investment with big upside in former WSU Cougar Marquess Wilson.

It is not common for seventh-round draft picks to pan out as big-time players, but before a puzzling 2012 season at Washington State, the wide receiver was viewed as a potentially big prospect for the NFL.

Wilson quit the team after nine games this past season and accused coach Mike Leach of abuse, something he later recanted. Wilson’s exit happened after he was suspended for violating team rules.

“I feel like I could have handled it a little better, but, like I said, I am just moving forward,” Wilson said. “I am excited about the opportunity I have at hand.”

Wilson said he met with the Bears in Pullman, Wash., and then was in semi-regular contact with the club leading up to the draft.

Bears coach Marc Trestman said what happened in school was not a red flag for the team when it came to Wilson’s character.

“I would consider it a young guy making a very, very small mistake that put him in a position that got him in trouble,” Trestman said. “I think that like any young guy, I am a parent, we’re parents here. Our kids have made mistakes along the way. He’s a good kid with a big upside. He’s come to the right place. He’s come to a locker room where we have players and coaches that will set him straight right from the beginning and get him going the right direction. It’s an exciting opportunity for us to grow a young man, to allow him to mature off the field as well as on it and the upside as a talent, we’re very excited about it.”

At 6-2, 194 pounds, he has a big frame and was very productive for the Cougars with 189 receptions for 3,207 yards (17 yards per catch) and 23 touchdowns in only 33 college games. But he needs to get stronger and has struggled with drops at times.

Wide receiver wasn’t a high need for the Bears, but Wilson, barring the troubles he had in Pullman, is an intriguing prospect and the risk with the 236th overall pick in the NFL Draft was minimal. At that point in the draft, teams are basically securing players that they don’t want to have to compete for in free agency.

“We felt that the point in the draft that a person of this kind of talent deserved a second chance,” Bears general manager Phil Emery said. “His biggest sin is he walked out. He made a young decision. He’s just 20. He’s going to be 21 this fall. Felt very comfortable that this was a good person who made an immature decision. He’s owned up to that decision. He’s ready to roll. We’re very excited he’s with the Chicago Bears.”