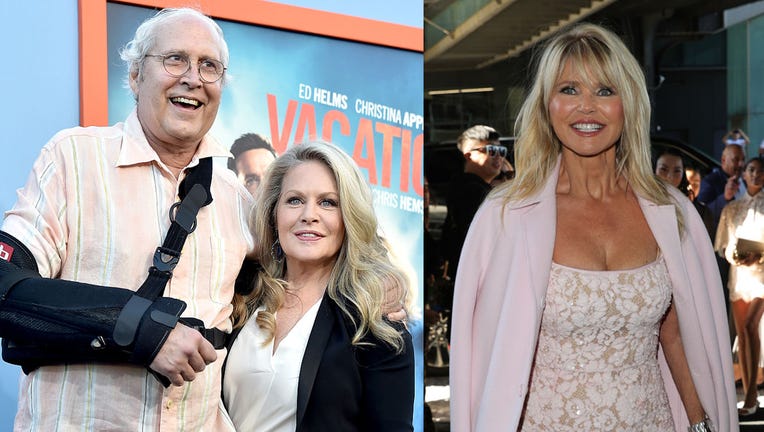 The Griswold family adventures became a cult classic beginning in the ‘80s with the first "National Lampoon’s Vacation" movie.

Chevy Chase, Christie Brinkley and Beverly D'Angelo reunited almost 40 years after the release of the first film as they enjoyed some downtime before hitting a comic con in Pennysylvania.

"These Three Amigos are going to need a Christmas Vacation after @steelcitycomiccon," Brinkley captioned a photo with her friends on Instagram. "I just love you two."

The trio were dressed in their most festive holiday attire and wore matching Christmas sweaters with embroidered reindeer and snowflakes.

"The Three Amigos," Chase echoed on his own account. Juliette Lewis, who played their daughter in the 1989 "National Lampoon's Christmas Vacation," responded back with a host of emojis.

David Spade joined in on the good times and wrote, "So great."

Comedic actor Chevy Chase was seen handing out chicken and fries at the drive-thru of a Raising Cane’s Chicken Fingers restaurant in Charleston after enjoying a meal there himself on Dec. 2.

D'Angelo was just as excited about seeing her friends and wrote, "HIGH SCHOOL REUNION."

"Threes never a crowd with this crew," Chase commented.

The trio were in town for a panel discussion at Steel City Con.

Chevy Chase and Beverly D'Angelo starred as Clark and Ellen Griswold in the classic family series which began with an innocent, cross-country drive to Walley World theme park.

The 1983 film directed by Harold Ramis and written by John Hughes also starred Anthony Michael Hall, Dana Barron, Randy Quaid and John Candy. Brinkley had the iconic role of "The Girl in the Ferrari."

The Griswold's headed to Europe for the second movie, and returned to Chicago for the ultimate holiday tradition, "National Lampoon's Christmas Vacation."