Strong winds and dry conditions that drove the Caldor Fire east through high elevations of the Sierra Nevada for days faded, sparing for now the largest city of a recreational gem that straddles the California-Nevada state line. Thousands were forced to flee South Lake Tahoe earlier this week.

"I feel like we are truly the luckiest community in the entire world right now. I’m so incredibly happy," said Mayor Tamara Wallace, who evacuated to Truckee, California.

Follow below for updates about the Caldor Fire and other wildfires in KTVU's live blog. (App users click here to view the blog.)

KTVU FOX 2's Brooks Jarosz reports from one of the eight evacuation centers for evacuees in the Calfor Fire in California and Nevada.

But wind gusts were likely in some areas, and the forest was still extremely dry, officials warned. The fire is pushing on several fronts, threatening multiple communities.

Still, the mood was one of optimism, given the speed with which the fire grew earlier in the week. Flames raced so quickly toward the resort city that officials ordered a mass evacuation of all 22,000 residents on Monday before ordering those across the state line in Douglas County, Nevada, to leave a day later.

"It’s finally a chance to take a breath," said Clive Savacool, chief of South Lake Tahoe Fire Rescue. "It’s a breath full of smoke. Nonetheless, I think we’re all breathing a little bit easier and we feel like we’re making some progress."

Russ Crupi, who two days ago was arranging sprinklers around his mobile home park in South Lake Tahoe just miles from the fire line, had turned off the water for now, feeling confident his neighborhood was no longer under threat. The nearby mountains, cloaked in smoke for most of the week, had become visible.

Some fire evacuation orders are lifted

Some fire evacuation orders are lifted for people living near the Caldor fire. Allie Rasmus reports

"I’m just happy they stopped it. It looked close," he said.

The Caldor Fire spanned more than 328 square miles and was 25% contained Thursday. Its northeast tip was about 3 miles south of South Lake Tahoe and nearing the California-Nevada state line, where visitors like to hit the casinos in Stateline.

About 15 million people visit Lake Tahoe every year for hiking, snowboarding, water sports and gambling. The possibility that wildfire might rip through the international destination alarmed those who have vivid memories of vacationing at Tahoe.

California has experienced increasingly larger and deadlier wildfires in recent years as climate change has made the West much warmer and drier over the past 30 years. Scientists have said weather will continue to be more extreme and wildfires more frequent, destructive and unpredictable. No deaths have been reported so far this fire season.

Fire crews from around the country joined in the fight against the fire, which broke out Aug. 14 southwest of the Lake Tahoe area, chasing residents from more remote areas of El Dorado County. Officials said that at least 622 homes, 12 commercial properties and 177 minor structures have been destroyed, though the tally is incomplete because many areas are not safe to be surveyed.

The Caldor Fire still threatened at least 33,000 more homes and structures. On Wednesday, firefighters were ferried by boat to protect cabins at nearby Echo Lake, while three of the region's largest ski resorts, Heavenly, Kirkwood and Sierra at Tahoe, brought out snow-making devices to hose down buildings.

Jonathan Pierce, a spokesman with the California Department of Forestry and Fire Protection, said crews are chasing spot fires and trying to keep flames away from populated areas.

There was no timeline for when residents might return.

Fire officials say gusty winds are calming and giving them a chance to throw all their resources into boxing a California blaze that is scant miles from Lake Tahoe and neighboring Nevada.

South Lake Tahoe can easily accommodate 100,000 people on a busy weekend, but on Thursday, just before the Labor Day weekend, it was eerily empty. Thick smoke made it difficult to see across the street, said Savacool, the fire chief.

"I’s really just a dead, dead town and it’s got an apocalyptic feel with garbage strewn about from the bears," he said.

President Joe Biden on Wednesday issued a federal emergency declaration and ordered federal assistance to supplement state and local resources for firefighting efforts and relief for residents in four counties affected by the fire.

"I’ve seen these firefighters up close. Their courage is astounding, and they’re some of the bravest people I’ve ever known — and I’ve known a lot of them," he said from the White House on Thursday, addressing is administration's response to Hurricane Ida. 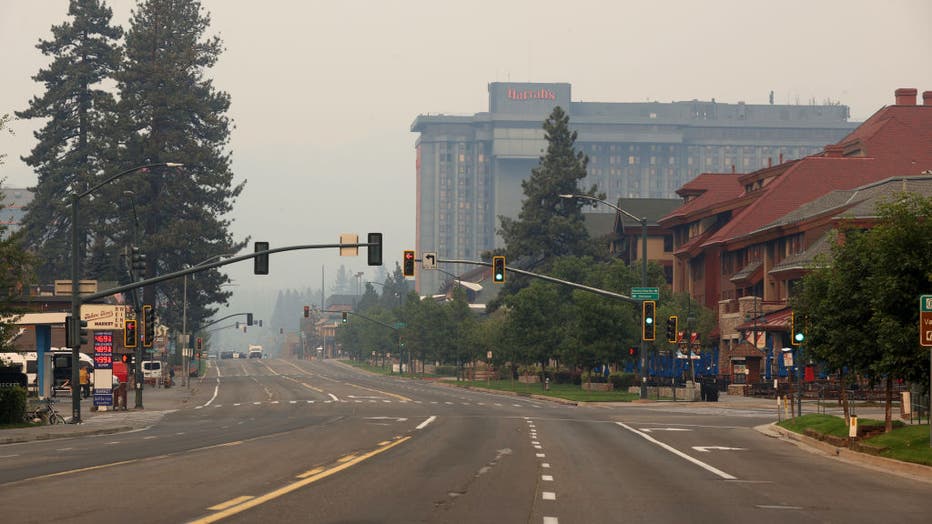 More than 15,000 firefighters were battling dozens of California blazes, including another monstrous blaze, the Dixie Fire about 65 miles (105 kilometers) north. It is the second-largest wildfire in state history at about 1,340 square miles.

The weeks-old fire was 55% contained. As of Thursday, officials said it had destroyed 688 homes, eight multi-unit residences, 139 commercial properties and hundreds of minor structures. 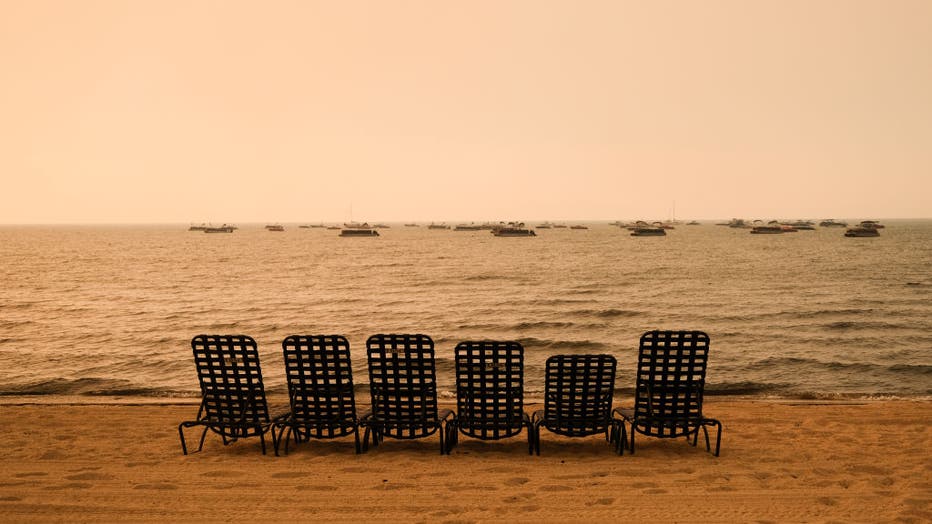 An empty beach near Highway 50 with sky obscured by wildfire smoke due to the Caldor Fire in South Lake Tahoe, California, U.S., on Tuesday, Aug. 31, 2021. California's Caldor Fire moved closer to a popular alpine tourist destination in Northern Cali