New Yorkers experiencing financial hardship during the Coronavirus pandemic have been protected against being evicted.That could change on Aug. 31 if the statewide eviction moratorium comes to an end.

WASHINGTON - A federal appeals court on Friday allowed the COVID-19-related pause on evictions imposed by the Centers for Disease Control and Prevention to remain in place, setting up a likely battle before the nation’s highest court.

A three-judge panel of the U.S. Court of Appeals for the District of Columbia rejected a bid by Alabama and Georgia realtors to block the eviction moratorium reinstated earlier this month. The panel said the appeals court had rejected a similar bid and a lower court also declined to overturn the moratorium.

"In view of that decision and on the record before us, we likewise deny the emergency motion directed to this court," the judges said in the ruling.

The realtors are likely to appeal to the Supreme Court, which voted 5-4 in June to allow the moratorium to continue through the end of July. But Justice Brett Kavanaugh — who joined the majority — warned the administration not to act further without explicit congressional approval.

The Biden administration allowed an earlier moratorium to lapse on July 31, saying it had no legal authority to allow it to continue. But the CDC issued a new moratorium days later amid mounting pressure from lawmakers and others to help vulnerable renters stay in their homes amid the surge of the coronavirus’ delta variant.

As of Aug. 2, roughly 3.5 million people in the United States said they faced eviction in the next two months, according to the Census Bureau’s Household Pulse Survey.

The new moratorium temporarily halted evictions in counties with "substantial and high levels" of virus transmissions and would cover areas where 90% of the U.S. population lives. 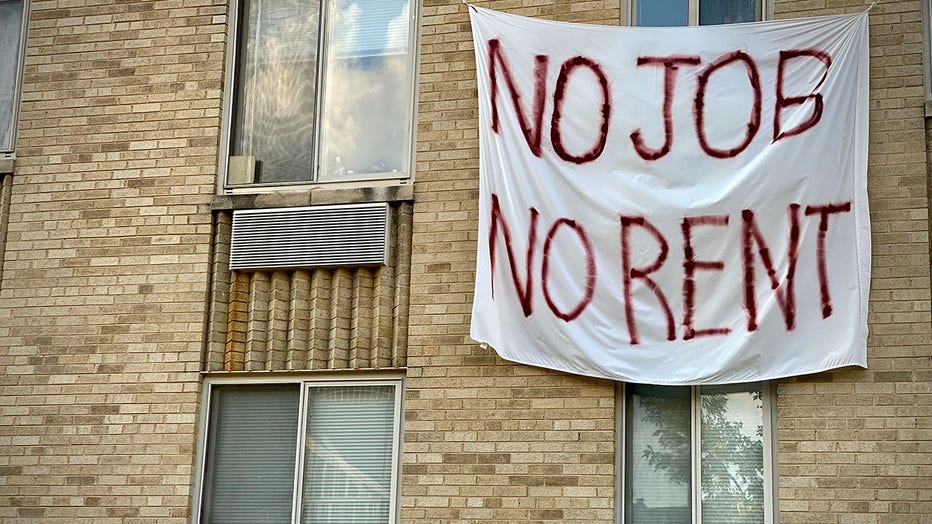 A banner against renters eviction reading no job, no rent is displayed on a controlled rent building in Washington, DC on August 9, 2020.

The Trump administration initially put a nationwide eviction moratorium in place last year out of fear that people who can’t pay their rent would end up in crowded living conditions like homeless shelters and help spread the virus.

Biden acknowledged there were questions about the legality of the new eviction freeze. But he said a court fight over the new order would buy time for the distribution of some of the more than $45 billion in rental assistance that has been approved but not yet used.

In urging the appeals court to keep the ban in place, the Biden administration noted that the new moratorium was more targeted than the nationwide ban that had lapsed, and that landscape had changed since the Supreme Court ruling because of the spread of the highly contagious delta variant.

The landlords accused Biden’s administration of caving to political pressure and reinstating the moratorium even though it knew it was illegal in order to buy time to hand out rental aid.

"As the President himself has acknowledged, the CDC’s latest extension is little more than a delay tactic designed to buy time to distribute rental assistance," their attorneys wrote in court documents.

A lower court judge ruled earlier this month that the freeze is illegal, but rejected the landlords’ request to lift the moratorium, saying her hands were tied by an appellate decision from the last time courts considered the evictions moratorium in the spring.