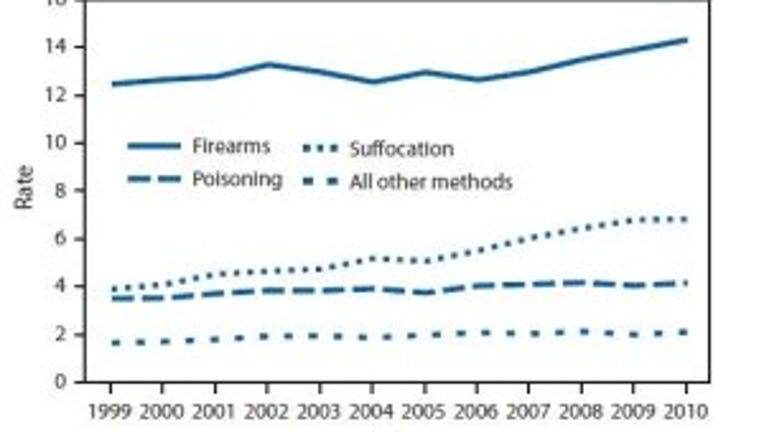 
The greatest increases occurred in people 50 to 54 years old (up 48%) and among people 55 to 59 years old (up 49%). Among men, suicides in middle-aged people rose 27.3%; among women, 31.5%. Whites and Native Americans had steeper increases than other demographic groups.  Rates increased in all states, whether they had relatively high, average or low suicide rates.

The agency also analyzed mechanism of suicide.  Suffocation (mostly hanging) rose 81% over the time period; poisoning (mostly drug overdose), 24%; and death by firearm, 14%.  Men were most likely to turn to firearms or suffocation.  Women were more likely to choose poisoning or firearms.

“Most suicide research and prevention efforts have focused on youths and older adults,” wrote the CDC research team, in an editorial note accompanying the report. “The results underscore the importance of prevention strategies that address the needs of persons aged 35-64 years.”

While further research would be needed to understand the cause for the rise in suicides, they added, possible contributing factors included the recent economic downturn, a rise in intentional overdoses associated with the increased availability of prescription opioids, and a “cohort effect” particular to baby boomers, who also had notably high suicide rates during their adolescent years. (There was no significant change in suicide rates among people aged 10 to 34 or 65 and older.)

The team also said the especially steep increase in suicides by suffocation among middle-aged people was “particularly troubling,” because such suicide attempts are highly likely to result in death.

The report is available in the CDC journal Morbidity and Mortality Weekly Report.