Why CDC recommends masks indoors, even for fully vaccinated people

The CDC updated its mask guidance on July 20, saying that people who live in areas with high COVID-19 transmission, should wear masks indoors regardless of vaccination status.

At least 180 COVID-19 cases have been linked to an Illinois church camp for teenagers and an affiliated men’s conference held in June that did not require attendees to be vaccinated, tested or wear masks, the U.S. Centers for Disease Control and Prevention reported this week.

No deaths were reported among the outbreak-associated cases, and a total of five people were hospitalized. The CDC noted that all of the individuals hospitalized were unvaccinated.

The investigation, published Tuesday in the CDC’s Morbidity and Mortality Weekly Report, said more than 1,100 people from at least four states were ultimately exposed to the virus by those who attended the events.

"This investigation underscores the impact of secondary SARS-CoV-2 transmission during large events such as camps and conferences when COVID-19 prevention strategies, including vaccination, masking, physical distancing, and screening testing, are not implemented," the CDC report concluded.

The five-day overnight camp, which was held between June 13-17, included teenagers from a church organization with locations across western Illinois, Iowa and Missouri, the report said. It was attended by 294 campers and 41 staff members.

No proof of COVID-19 vaccination, testing or masking was required. Campers were housed together in "large, shared boarding facilities," dined together in a cafeteria, and frequently participated together in both indoor and outdoor activities, the report said.

On June 16, one camper left early due to a "fever and respiratory symptoms" and later tested positive for COVID-19. The CDC report said other campers and staff were notified and encouraged to get a test.

Six camp staff members who eventually tested positive for COVID-19 also attended the affiliated men’s conference between June 18–19. All six did not receive their results until after the conference ended. 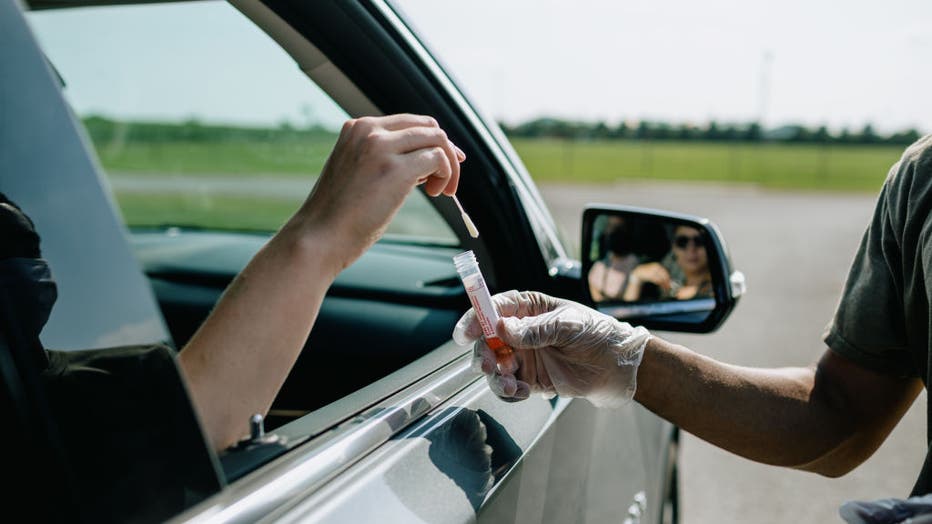 FILE - A member of the National Guard collects a COVID-19 swab test from a driver at the University of New Orleans Lakefront Arena drive-thru facility in New Orleans, Louisiana, on Aug. 24, 2021. (Bryan Tarnowski/Bloomberg via Getty Images

The men’s conference, like the overnight teen camp, did not require vaccination, testing or masking, the CDC report said. It was attended by 500 people and 30 staff members.

By Aug. 13, the CDC had traced 122 primary COVID-19 cases, including 87 linked to the church camp and 35 linked to the men’s conference. The agency identified 58 more COVID-19 secondary cases among close contacts of camp or conference attendees.

The CDC report said three people who attended the men’s conference and later tested positive for the virus reported being symptomatic during the event.

The CDC report warned that the identified COVID-19 cases were likely an undercount, as not all people participated in contact tracing. Investigators also did not have access to complete rosters for the camp or conference, "which limited case finding efforts and analyses" — particularly findings related to the attendees’ vaccination status.

CDC guidance for youth camps amid the ongoing pandemic states that camps should promote vaccination, and for camps where not everyone is fully vaccinated, facilities should implement masking, physical distancing, handwashing and other prevention strategies.

The report did not identify the church organization, but media reports have since identified the organization as The Crossing, a non-denominational Christian church. The Chicago Tribune reported that the outbreaks occurred at its Crossing Camp in Rushville, Illinois. The camp’s "What to Bring" section of its website lists items like water shoes, a sleeping bag and a notebook but does not list masks.

The Crossing did not immediately respond to FOX Television Stations’ request for comment.

A number of other COVID-19 outbreaks tied to summer camps have been reported this summer, including in places such as Texas, Florida and Kansas.

Health officials in Houston reported more than 130 young people who tested positive for the virus in cases linked to a church summer camp. The health department in Leon County, Florida, which includes Tallahassee, said in early July that an increase in COVID-19 cases there was also tied in part to summer camp outbreaks among children and teenagers.

In Kansas, at least 50 people were infected in an outbreak traced to a church summer camp held in June near Wichita, according to the Associated Press.