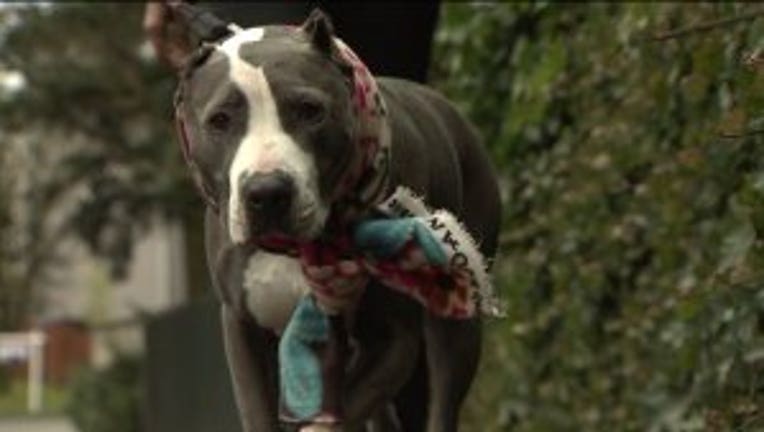 SEATTLE -- A stinky situation is causing a lot of problems in one Seattle neighborhood. Some people in Greenwood say dog owners aren’t cleaning up after their animals.

So one woman tried to take care of the problem in her own way, but may have hurt a dog in the process.

Walking around her Greenwood neighborhood last week, a pit bull named Buddha unwittingly stepped in a patch of cayenne pepper.

Just a sprinkle of the stuff can be harmful to an animal, irritating their skin, causing diarrhea, even leading to ulcers.

Monica Gujral Wallace, Buddha’s owner, said the dog “was licking nonstop. It’s in her throat, in her esophagus, in her tummy.”

Wallace said piles of pepper were purposely dumped on the curb, enough to send Buddha to the vet.

Her veterinarian “said it could have burned her esophagus and her stomach. Her feet and her legs started getting red, red, red, and it looked like cuts,” Wallace said.

The Greenwood Court Manor property manager dumped jars of the spice because, she says, the grass is being used as a public toilet for people’s pets.

Justin Alley, who lives in the neighborhood, said cayenne pepper is “like anti-freeze out for raccoons; it’s a deliberate health hazard.”

The property manager didn’t want to comment on camera.

But even dog owners in the neighborhood agree that animal waste is a problem.

“People aren’t cleaning up after their dogs and that’s a hassle, but that’s no call to go making things poisonous,” Alley said.

Since last week, someone has picked up the pepper jars, and the rain has washed away some of the cayenne. But Wallace said it should never have come to this.

“Why do you feel the need to police the area, when you don’t own the land, the property, the complex, the sidewalk or the street?” Wallace asked.

Alley said, “She probably meant it just as a deterrent, but that’s a really dangerous deterrent, especially on a public street, without public knowledge.”

As for Buddha, she's licking her wounds and recovering.  And the Wallaces are walking her on the other side of the street now and are on the lookout for pepper traps.

State Rep. Cindy Ryu, D-Seattle, got wind of these pepper problems. She said she is planning on researching Seattle’s dog waste laws and working on what she’s calling “the Buddha Animal Safety Act” in the interim legislative session.