After opening the door, the cat falls to freedom while Mission Impossible music plays in the background.

JOURDANTON, Texas - A cat quickly cracked the lock on an "escape-proof" cage in a video shared by Atascosa County Animal Control in Texas.

In the video, the black cat uses its paw to lift the lock on its cage. After opening the door the cat falls to freedom.

But this isn’t the first time an escape artist cat in Texas went viral.

In 2019, Friends For Life Animal Rescue and Adoption Organization in Houston posted a viral Facebook post after a cat named Quilty wouldn’t stop letting other cats out of their cages.

"If someone out there is looking for a clever cat that gets along with dogs but does not get along with closed doors, we have someone they really need to come and meet," wrote the shelter in the Facebook post.

RELATED: ‘He will not be contained’: Quilty the shelter cat put in solitary confinement after repeatedly freeing other cats

One day, shelter staff arrived to find several cats walking around the shelter followed by a path of destruction. After reviewing security footage, Quilty was found guilty.

"One of them had peed on the receptionist’s mouse pad. Another had used the donation bin we keep upfront as a litter box. Most everything was knocked off the counter," said the shelter. 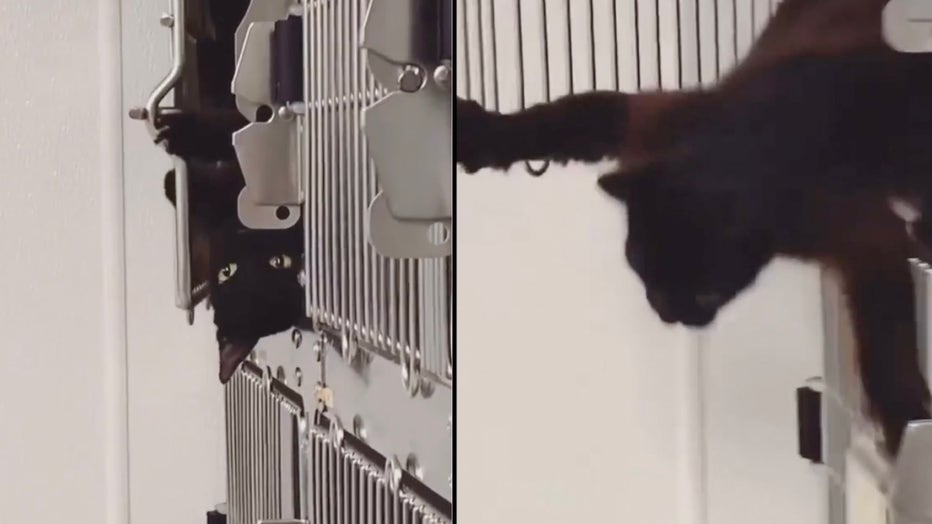 A cat quickly cracked the lock on an "escape-proof" cage.

The shelter shared photos of Quilty locked behind a door secured with a broom with the caption, "Quilty will not be contained. And he has no shame."

Soon, Quilty gained a following with the online hashtag "#freequilty." Merchandise themed after the cat was sold and the shelter's Facebook post totaled over 14,000 shares.

Quilty escaped his enclosure before finding his forever home with a new family.