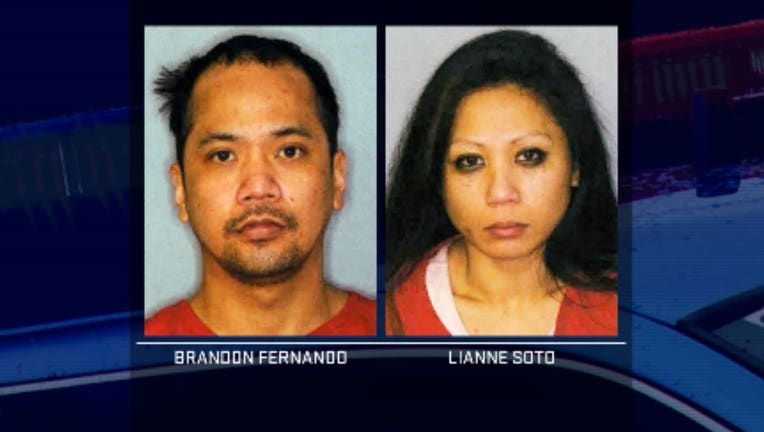 CAPTURED:  After more than a year and a half on the run, Brandon Fernando was arrested on Saturday, December 21st for Resisting Arrest, Obstruction, two counts of Residential Burglary and ID Theft.  He is being held without bail.

Lianne Soto was arrested on June 19, 2019 and remains in the King County jail on $105,000 bail for Residential Burglary, 4 counts of ID Theft and Possession of Stolen Property.

According to charging documents, Fernando took off and left Soto behind when he spotted Seattle police officers they closed in on a storage unit they had been using.

SEATTLE -- Police are asking for the public’s help to find 'armed and dangerous' theft suspects,  Lianne Soto and Brandon Fernando aka 'Kevin Magsombol'.

Detectives say home surveillance video from a home in Homer Harris Park near Madison Valley on December 27th shows the pair pulling into a driveway in a dark gray Honda Pilot with a stolen license plate.   Lianne climbed out of the passenger seat and stole a package containing books and lighting.

It is just the latest case in a string of crimes. In September, Fernando is accused of stealing a dozen firearms during a home burglary in the 4000 block of 14th Avenue South in Beacon Hill along with thousands of rounds of ammunition.  Detectives say Fernando and Soto are stealing cars, switching plates and then driving around and stealing mail and packages and breaking into homes in Seattle, Everett, Tukwila and Renton to burglarize them.

"I look at this guy's record. A number of felony warrants, extradition all 50 states. That doesn't happen very often, possession of firearms, theft burglary, continue to name him 'armed and dangerous.' Isn't it just time to get these guys off the street? I mean they are dangerous. Somebody is going to get killed and we really need your assistance," said Ret. Det. Myrle Carner with Crime Stoppers of Puget Sound.

Both have warrants for their arrest. Brandon is a nine-time felon.

Lianne is charged with second-degree burglary in Everett.