CAPTURED -- Kirkland Police Detectives arrested Lauren Klavano on Friday on warrants related to the recent thefts involving Botox services.  Klavano had been identified as the person who received Botox treatments, then left without paying after advising she was retrieving her wallet from her car. Klavano was taken into custody by Kirkland Police Detectives in Auburn, where she was scheduled for a separate court appearance.   She is being charged with three counts of Theft 2nd degree and one count of attempted Theft 2nd degree, in relation to the three incidents in Kirkland and Bellevue.  Kirkland Police thank everyone who contacted them with information related to Klavano’s identity,or whereabouts. KIRKLAND -- Kirkland Police are asking for the public's help to locate 30-year-old Lauren L. Klavano.   Detectives are obtaining warrants for Klavano’s arrest and are asking anyone who may know her current location to contact the Kirkland Police Department or Crime Stoppers of Puget Sound at 1-800-222-TIPS or through the P3 Tips App on your cell phone. Klavano is 5'09" and weighs 110 pounds. If you wish to speak with an investigator about this case, contact Detective James Hill at 425-587-3507 or email at jhill@kirklandwa.gov. WANTED IN KIRKLAND and BELLEVUE -- ‘Brazen’ -- that's the word Kirkland Police are using to describe this woman. Detectives say she used a fake name when she got $2,800 worth of Botox, Voluma face filler and Juvederm earlier this month and then took off without paying. Turns out, Bellevue Police say she did the same thing to another medical provider last November for almost $1,700 worth of services. Now, they're asking for your help to identify and help locate her. When new patients at Naficy Plastic Surgery and Rejuvenation Center make an appointment, they now have to provide a valid credit card, after police say one patient using the fake name, ‘Celsey Ryan,’ ripped them off. “She wanted the last appointment of the day, so she came in and met with one of our providers to get some Botox and dermal fillers as well,” said the center’s COO, Elena Moye Johnston. She says the woman only allowed them to take the one photo below and when it came time to pay her bill of $1,675, she pretended to get a phone call from her mother. 'Oh, I just need to run out, show my mother where I am. I am going to leave my purse and my phone here. I will be right back,” described Moye Johnston. When the woman didn't return, staff looked at the purse she'd left behind. "Took a peek inside and it was a dummy, decoy purse. There was absolutely nothing in there,” said Moye Johnston. 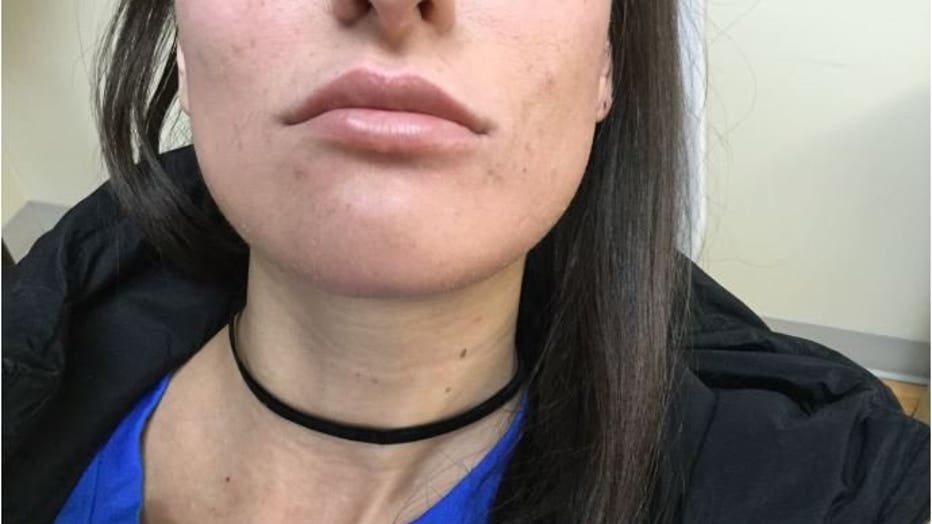 Kirkland Police say the same scam happened at Dermavita Medispa and Skin Care Clinic on July 5th, but this time, providers took plenty of photos that you can see below of the woman who said her name was ‘Taylor McDonald’ and who now has blond hair. She got more than $2,000 worth of face filler. “This person has obviously figured out a way that they think they can get away with this. Went through and had the Botox injections, made an excuse that she left her wallet in her car and that she would leave her purse and cell phone for kind of good faith, went out to retrieve it and never returned,” said Kirkland Police Lt. Rob Saloum. Again, the items she left behind were just a decoy. "The phone had no SIM card, wasn't registered, the purse was empty. Still had a tag from the Goodwill in it where she got it,” said Lt. Saloum. Officers suspect there may be more victims and are warning providers to be on the lookout for this ‘Face Filler Fraudster.’ "This is a repeat offender. She's obviously very bold. We're all in a very small radius, so she's pulled the same thing at all of us, so I would absolutely love to see her brought to justice,” said Moye Johnston.

Police describe her as 5'8” to 5’11”, average build and between 25 to 30 years old. I will add she has plump lips and likely no expression whatsoever because of all the Botox. If you know her name, or where she is, submit an anonymous tip to Crime Stoppers through the P3 Tips App on your phone, or call the hot line at 1-800-222-TIPS(8477). It’s anonymous and you’ll get a cash reward of up to $1,000 if your tip helps lead to her arrest.