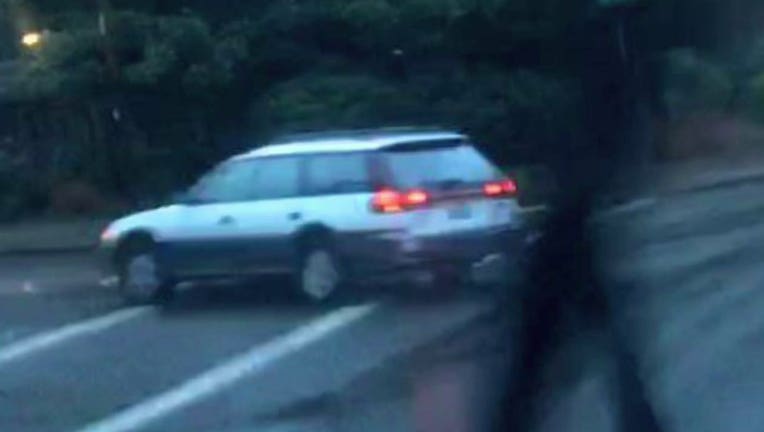 CAPTURED:  35-year-old Michael Wages is currently serving a 36 month sentence after he was found guilty on June 1, 2017 for Vehicular Assault on January 22, 2016. He ran over John Sullivan several times with a stolen 1996 Subaru Legacy Outback wagon on and then sped away. Sullivan had multiple broken bones. “It crushed my ribcage and I was conscious throughout all of this. I yelled, stop! Again -- just please stop! I’m under the car, and they didn't stop," said Sullivan.

The Subaru was reported stolen in Tacoma on January 19, 2016 and recovered by Bellevue Police. It was found thanks to a Washington’s Most Wanted viewer tip to Crime Stoppers of Puget Sound. That led to the recovery of DNA on the steering wheel. The lab results were returned to police on September 29, 2016 and they identified Wages as the driver which was confirmed by his ex-girlfriend who was with him in the car. Detectives also learned from a confidential informant that Wages had bragged about the hit and run and getting away.

He has six previous felony convictions including Possession of a Stolen Vehicle in Pierce County in 2016, Bail Jumping, Intimidating a Public Servant, Possessing Stolen Property in the Second Degree in King County in 2014 and Residential Burglary in 2009 in King County. He has 10 misdemeanor convictions include Vehicle Prowl 2 in 2013, Assault 4 and Harassment in 2011 and Possession of Burglary Tools and Theft 3 in 2008.

Wages is WMW Capture #941 as Crime Stoppers of Puget Sound just recently paid the cash reward to the tipster who finally came forward.


UPDATE February 10, 2016 --
Washington's Most Wanted viewer tips to Crime Stoppers have helped locate the Subaru that hit a bicyclist in Kirkland.

It was at a tow yard.

The car was reported stolen before the bicyclist was hit.

Kirkland Detectives are processing it for evidence.

HIT AND RUN DRIVER WANTED IN KIRKLAND February 2, 2016 --
A Kirkland man is alive and healing after a driver hit him, dragged him and left him for dead.

He was riding his bike at the time.  Now, John Sullivan wants to catch the driver who put him in the hospital.

“I just found myself underneath this car. I was being dragged up the hill by the car,” says Sullivan.

“I remember it going over my head. I was wearing a helmet, so my helmet saved my life,” says Sullivan.

Kirkland Police say the driver behind the wheel of a white Subaru hit John as he rode his bike to work at about 8 a.m. on Jan. 22  off Lakeview Drive.  John says he saw the white Subaru driving up the hill as he was riding down on his bike. He thought the Subaru was going to go left to park. Instead, it took a right turn, slamming head-on into John.

He says the driver rolled over his body a second and third time, before driving off and leaving him in the road.

“It crushed my ribcage and I was conscious throughout all of this.  I yelled, stop! Again -- just please stop! I’m under the car, and they didn't stop. "

Another driver followed the Subaru and took cell phone video.

Police believe  the car was a 1995-2000 Subaru Legacy Outback station wagon. The driver is described as a white male. Officers can`t identify the license plate because it was raining and the windshield is blurry. But witnesses believe the plate started with the letter "A" and there's a sticker on the left rear bumper.

“There’s a lot of those Subaru wagons out there. Maybe that sticker will be enough for somebody to recognize that,” says Lt. Mike Murray with Kirkland Police.

John spent nine days in the hospital and he has a long recovery ahead of him.  He had a fracture under his right eye, seven broken ribs, a fractured vertebrae, a broken hip and his ear was nearly ripped off.

Now, John and his wife hope the driver will do the right and come forward.