SEATTLE – One of two men who robbed a Mountlake Terrace marijuana store at gunpoint was sentenced Friday in U.S. District Court to 11 and a half years in prison and five years of supervised release for three federal felonies.

23-year-old Eric Woodbery was convicted in June 2019 of robbery, possession of marijuana with intent to distribute and aiding and abetting possession of a firearm in furtherance of a crime of violence and a drug trafficking crime.  At the sentencing hearing U.S. District Judge Richard A. Jones said, the robbery was a “very aggressive, very violent action on your part… (the victims) were terrified.”

According to records in the case and testimony at trial, Woodberry and co-defendant Bradford M. Johnson robbed Rainier Cannabis in Mountlake Terrace on November 21, 2017.   The men entered the store carrying a stolen short-barreled rifle and a handgun.  Both wore masks.  They forced the employees onto the floor, took their phones and then ordered two of the employees to fill large bags with marijuana products and cash.  When they saw police arriving at the front of the store, they ran out the back and attempted to hide from police in the nearby neighborhood.  With the assistance of a police tracking dog, officers located Woodberry hiding in a boat stored next to a house a few blocks from the store.  Johnson was located a short time later.

Court records detail two other robberies and a Seattle robbery/burglary linked in police reports and state charging documents to Woodberry.
Johnson is scheduled for sentencing on November 22, 2019.


CAPTURE UPDATE November 24, 2017 --
Eric Woodberry, a second suspect who was wanted for a home invasion in Seattle in March -- was arrested early Wednesday morning for an armed pot shop robbery in Mountlake Terrace.

Mountlake Terrace Police say Woodberry and another suspect hit Rainier Cannabis late Tuesday night -- one armed with an AR-15 rifle, the other with a handgun. They ran out the back when officers arrived. A K9 track found one of the suspects hiding inside a nearby boat and the other suspect was located near a house on 64th Ave. W.

Woodberry was booked into the Snohomish County Jail for Robbery 1 and on his $400,000 warrant for the home invasion in March.

Another suspect in the home invasion, Zachary Kingsbury, surrendered just days after the case was featured on Washington's Most Wanted in early March.

A third suspect, Treveyon Curtis, had already been caught when the case aired.

CAPTURE UPDATE March 14, 2017 ---
Zachary Kingsbury made his first appearance in court on Tuesday, where a judge ordered him held on $250,000 bail

FUGITIVE CAPTURED March 13, 2017 ---
Zachary Kingsbury did the right thing and surrendered to Snohomish County Sheriff's deputies early this morning "after seeing enough of himself on television!"

He is being held in the King County jail without bail.

Eric Woodberry is still on the run.

Take a good look above at 19-year-old Zachary Kingsbury and 20-year-old Eric Woodberry.

Both men are from Lynnwood.

Seattle Police say the two of them were with a third suspect, Treveyon Curtis, who has already been caught and is being held on $400,000 bail.

Now, police need your help to find the other two suspects who were caught on surveillance video.

It was just before 3am on Saturday, February 25th when detectives say Kingsbury walked into a dark room  that Curtis was already searching. This break-in happened at a home on 13th Ave. S. in Seattle. You can see both of them are armed with a Glock semi-automatic pistol with an extended magazine. At one point Curtis turns his phone light on and that's when the camera switches to a color shot. He asks Kingsbury to hold it while he searches around. You can clearly see Kingsbury there in the red panda sweatshirt. Finally, Curtis realizes there is a camera and grabs it. Police say Woodberry was also seen on camera right as he looks in the door to the room and you can tell he is armed as well.

"The sad part about this whole situation is we have a female victim in the residence when this is taking place and she has her 4 year old son with her and she was confronted during this home invasion,” says Ret. Det. Myrle Carner with Crime Stoppers of Puget Sound. “Fortunately, she did not get hurt. Two out of three of these suspects are on the street and they are armed and they definitely are dangerous.”

Seattle Police say they stole a PlayStation 4, various games, a jewelry box and the victim's cell phone -- all told, it was worth about $1,500. 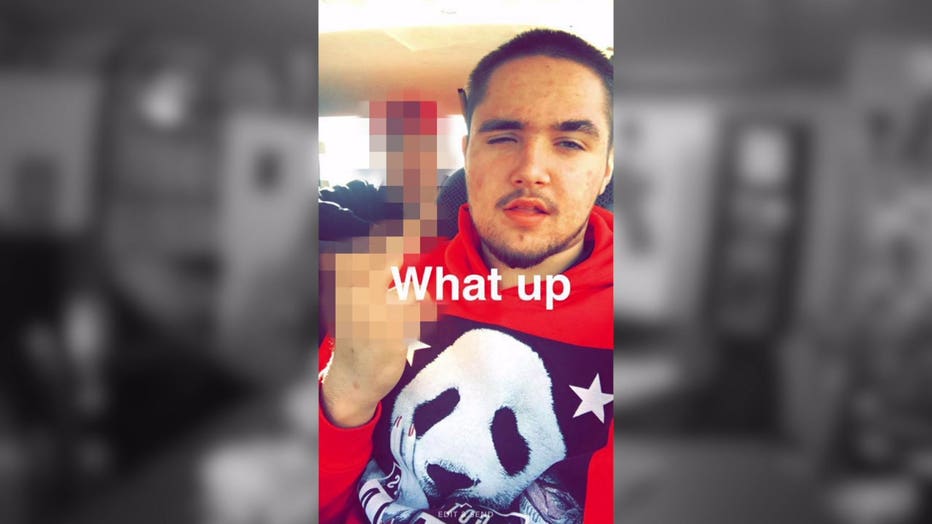 I should note that I reached out to Kingsbury on Facebook, it wasn't that hard to find him, just take a look at the photo above he's wearing the same red panda sweatshirt and flipping off the camera. He told me he planned to surrender. That was on Tuesday. He is still wanted.

One of Woodberry's relatives messaged and said they want him to know they love him and hope he does the right thing and turns himself in.

I'm not going to hold my breath though, so if you can tell detectives where to find Kingsbury and Woodberry, use the P3 Tips App on your phone or call Crime Stoppers at 1-800-222-TIPS.

There is a cash reward of up to $1,000 each, for information that leads to their arrest.