WASHINGTON - Acting Attorney General Jeffrey Rosen vowed that pro-Trump rioters who entered the U.S. Capitol would "face the full consequences of their actions under the law," and those consequences could include being charged under President Trump's executive order authorizing up to 10 years in prison for "injury of federal property."

"Our criminal prosecutors have been working throughout the night with special agents and investigators from the U.S. Capitol Police, FBI, ATF, Metropolitan Police Department and the public to gather the evidence, identify perpetrators and charge federal crimes where warranted," Rosen said in a statement on Thursday.

"Some participants in yesterday’s violence will be charged today, and we will continue to methodically assess evidence, charge crimes and make arrests in the coming days and weeks to ensure that those responsible are held accountable under the law," Rosen continued. 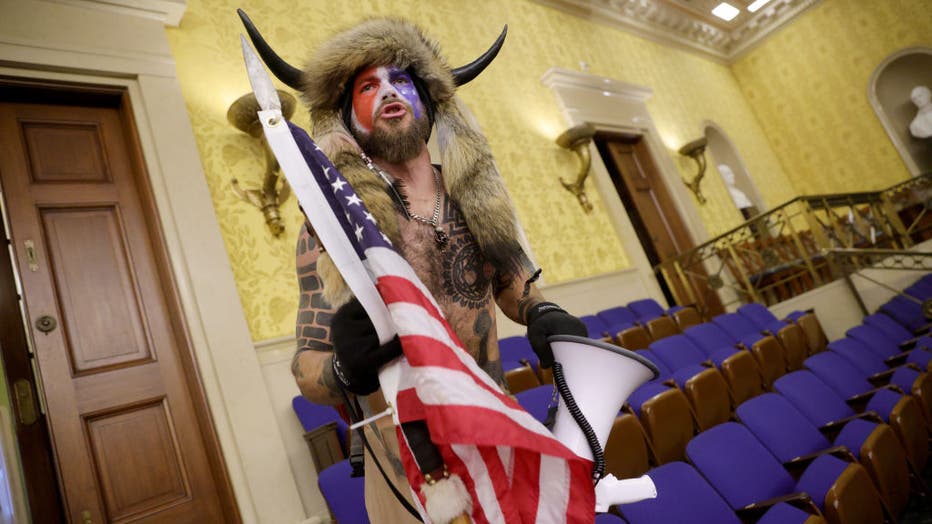 A protester yells inside the Senate Chamber on January 06, 2021 in Washington, DC.

DOJ officials told Fox News that federal law enforcement officials are investigating and will bring charges against participants in the mob that stormed the U.S. Capitol on Wednesday, using facial recognition and other tools from numerous pictures and a great deal of video.

The FBI digital team is already looking at pictures and videos from government resources, media outlets and social media, according to DOJ sources.

Rosen did not reference the executive order, which Trump signed in June after protesters targeted historic monuments and statues in the wake of George Floyd's death.

The order directs the Department of Justice to "prosecute to the fullest extent permitted under federal law" those who vandalize government property. Federal law allows 10 years in prison as a maximum punishment for such vandalism.

"I just had the privilege of signing a very strong Executive Order protecting American Monuments, Memorials, and Statues - and combatting recent Criminal Violence," Trump wrote on Twitter on June 26. "Long prison terms for these lawless acts against our Great Country!"

One woman was fatally shot when rioters breached the U.S. Capitol, and at least 14 officers were also wounded during the demonstrations, according to authorities. Two officers were hospitalized, including one who sustained serious injuries after he was pulled into a crowd and assaulted, police said.

The mob broke windows, entered both the Senate and House chambers and went into the offices of lawmakers, including House Speaker Nancy Pelosi, D-Calif.

Many on social media were quick to dig up Trump's support for the executive order on monuments and memorials during Black Lives Matter protests this summer.

"Ten years for every single one of these people," Republican strategist Luke Thompson wrote on Twitter, referring to Wednesday's demonstrators.

The FBI is asking for help identifying individuals who may have been involved in violent conduct or rioting. Anyone with information is asked to call 1-800-CALL-FBI or visit http://fbi.gov/USCapitol.