BIRMINGHAM, Ala. (AP) — Facing voters at last after the year's most bitter U.S. campaign, Alabama Republican Roy Moore cast himself Monday as the victim of a national barrage of unjust allegations of sexual misconduct with teenagers.

Rival Doug Jones, hoping to become the state's first Democratic senator in two decades, declared their race was Alabama's referendum on "who we are and what we're going to tell our daughters."

Allegations aside, President Donald Trump said in a robocall to Alabama voters that he badly needs Moore's own vote in the U.S. Senate. Former President Barack Obama and his vice president, Joe Biden, recorded calls for Jones seeking to break the GOP's lock on statewide office in Alabama.

Whether the calls would sway anyone so late in such a highly publicized campaign was an open question. So was the impact of a rash of false news stories that have appeared on social media spreading misinformation.

One website wrongly claimed that one of the women who have accused Moore of sexual misconduct had recanted. Meanwhile, Moore's detractors took to social media to claim he had written in a 2011 textbook that women shouldn't hold elected office. He didn't.

On election eve, Moore called in to a conservative talk radio show in Alabama to lament the tone of the campaign and portray cast himself as the victim of the sexual misconduct allegations.

"We've seen things happen in this campaign that I can't believe to this day," said Moore, who has denied all wrongdoing in contacts with the women who said he behaved inappropriately when they were in their teens and he was a local prosecutor in his 30s. One said he initiated sexual contact when she was 14.

"It's just been hard, a hard campaign," said Moore, a former Alabama Supreme Court chief justice who was twice removed from that post for violating judicial ethics. 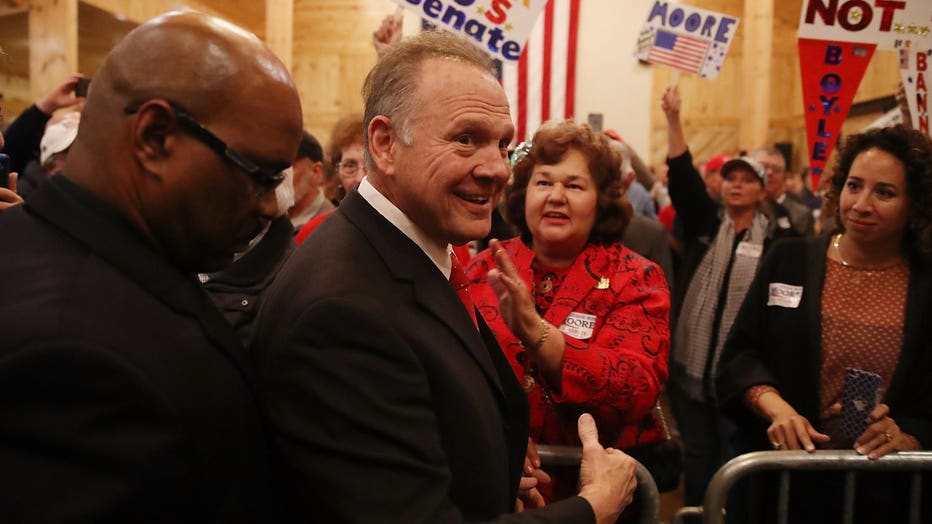 Republican Senatorial candidate Roy Moore arrives to speak during a campaign event at Jordan's Activity Barn on December 11, 2017 in Midland City, Alabama. Mr. Moore is facing off against Democrat Doug Jones in tomorrow's special election for the U.S

Former White House strategist Steve Bannon, whos spoke at a Moore rally Monday night, argued that the election is "greater than Judge Moore and even greater than the people of Alabama," casting it as a referendum on Trump's agenda.

Alabama has been a solidly Republican state for years, and Moore said he is much more in tune with the issues that matter to voters — and to the president.

Jones acknowledged Monday in Montgomery, "Look, I'm not going to be the senator that everybody in the state can agree with 100 percent of the time." But he added: "They'll know I'm somebody that will sit down with them. I will learn from them. ... I will try to be the public servant I think a U.S. senator ought to be." 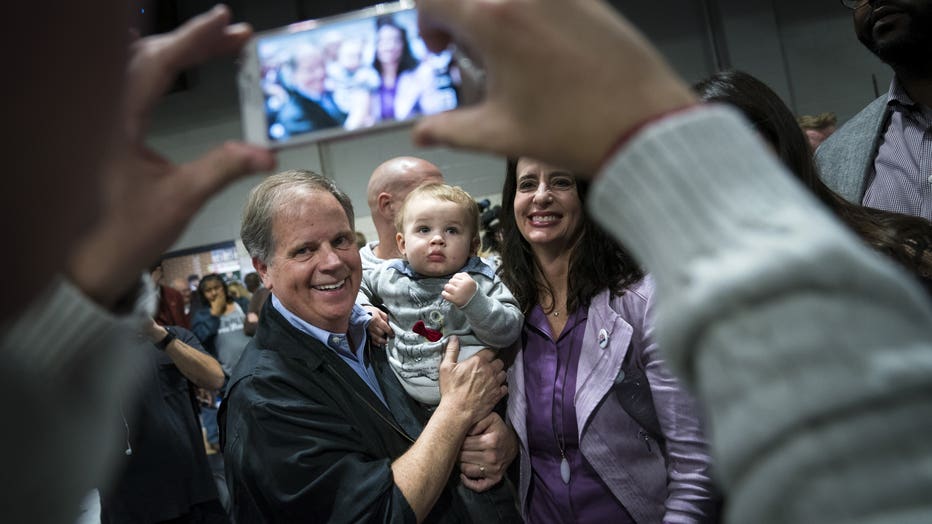 Democratic candidate for U.S. Senate Doug Jones poses for a photo with a baby after speaking at a fish fry campaign event at Ensley Park, November 18, 2017 in Birmingham, Alabama. Jones has moved ahead in the polls of his Republican opponent Roy Moor

Former professional basketball star Charles Barkley, speaking at a Jones rally Monday night, urged voters not to embarrass his home state by electing Moore. "I love Alabama, but at some point we've got to draw a line in the sand and say, 'We're not a bunch of damn idiots,'" Barkley said.

Voters seemed as divided as ever, including young Alabamians, some going to the polls for the first time.

Lillian Woolf, 18, a University of Alabama freshman, said she was disgusted that some people would vote for Moore despite the allegations by multiple women.

"It creeps me out," she said. "It shocks me just how much people are willing to ignore a person's past just because of their political stance."

But Joseph Chesnut, 20, a junior, said he will be voting for Moore, who "holds more Republican values ... just his Christianity standpoint and his Second Amendment standpoint and just, you know, trying to fight the establishment up there."

For Alabama Democrats, the special election is viewed as a chance to renounce a history littered with politicians whose race-baiting, bombast and other baggage have long soiled the state's reputation.

Many Republicans see the vote as an opportunity to ratify their conservative views — referred to by Moore as "Alabama values" — and protect Trump's agenda ahead of the 2018 midterm elections. But the sexual allegations have dented some of that support. Sen. Richard Shelby said "I think the Republican Party can do better," and he wrote in another Republican's name.

The two candidates have taken very different approaches to campaigning, with Jones holding events regularly and Moore popping up only occasionally in small churches, rallies or in interviews with friendly media.

In a morning stop at a diner in Birmingham, Jones accused Moore of disappearing during the campaign's closing days and claimed the Republican wasn't even in Alabama over the weekend.

"We're making sure our message is getting across while Roy Moore hides behind whoever he's hiding behind," said Jones.

Moore has made only a few public appearances since women came forward to accuse him of sexual misconduct years ago.

The winner will take the seat held previously by Trump's attorney general, Jeff Sessions. Republicans control the Senate with 52 seats.

Democrats don't hold a single statewide office in Alabama, and both houses of the Legislature are controlled by the GOP.