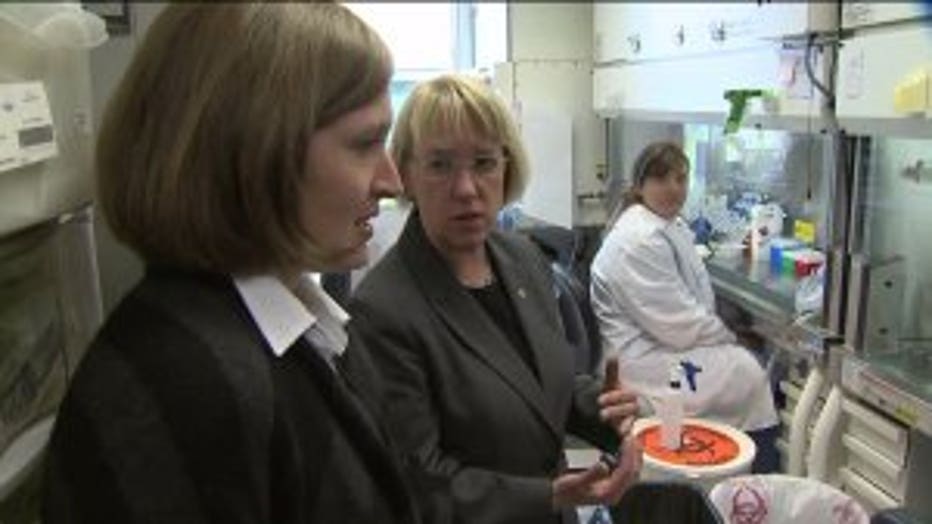 SEATTLE -- Ever since the federal sequestration went into effect, Sen. Patty Murray, D-Wash., is on what you might call a “sequestration tour” to point out how the cuts are affecting this state.

She’s been to Head Start classes, met with furloughed military families, talked to seniors who rely on Meals on Wheels, and, today, met with cancer researchers and patients to hear their stories about worries about the cuts.

“We need to replace the entire sequestration and do it in a responsible way,” Murray said.  “I am deeply concerned that the message in Washington D.C., has been, oh the sequestration, a few airport lines, we’ve fixed it, all’s good.”

During a tour of the Fred Hutchinson Cancer Research Center, Murray met a former patient, Lisa Verner, who had stem cell transplant a few years back to treat a life-threatening lymphoma.

“If we don’t have the NIH funding these clinical trials, then people like me die,” Verner said, calling the sequester cuts “disastrous.”

In all, there will be $44 million in NIH sequestration cuts in Washington state between now and September that will directly impact medical research.

“We are severely hampering our ability to save lives in the future, to save costs in the future, and to do what the country has always done, which is to innovate and be a leader in the world,” said Murray.