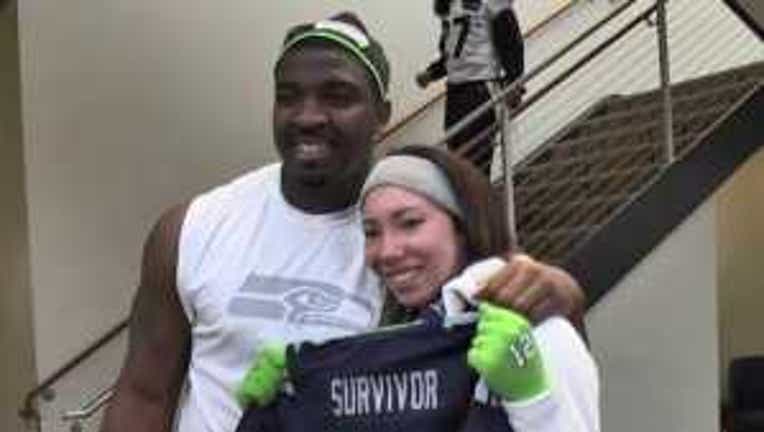 SEATTLE -- The noise was deafening, the Seahawks were dominant, and Rachel Henley was delighted.

“I keep randomly getting butterflies when I think of the reality of the situation,” Rachel said.

At least for one week, Rachel wasn’t overwhelmed by fears surrounding her second diagnosis of cancer – or the side-effects from another round of chemo.

The 19-year-old Tacoma a native spent a day at the Seahawks facility – and another one on the sidelines – thanks to a grass-roots effort that began on Twitter.

“Same day I start my chemo, Greg Scruggs comes to my house. He brings me bouquets and bouquets of flowers. That was just amazing,” she said.

And it was only the start. A few days later, throngs of Seahawks were meeting her.

“You know, you wanted to meet us, but it’s like all we do is play football. We don’t really do anything to change the world. But your story, and they way that you’ve gone about your life and the things that you’ve done, that’s an inspiration to us,” wide receiver Doug Baldwin told her before Sunday night’s game.

Quarterback Russell Wilson told her, “I’ll have to score a touchdown or two for you.”

And both Baldwin and Wilson kept their promises in the win over the San Francisco 49ers Sunday night at CenturyLink Field.

‘It means everything to me,” Rachel said, choking back tears.  “I love these guys’ motivation to fight throughout the whole game. And that’s exactly what I need to push through and keep fighting my fight as well.”