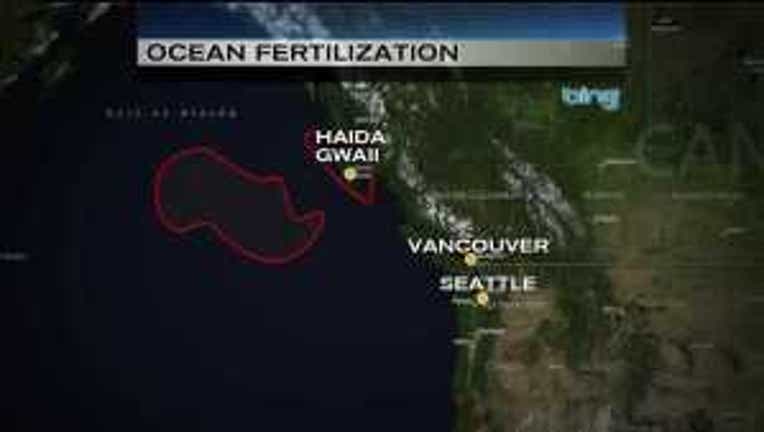 The Canadian government has launched an investigation into the dumping of more than 220,000 pounds of iron compounds into the Pacific Ocean off the coast of British Columbia. Supporters call it “ocean fertilization,” but there is heated debate about the practice that could have serious repercussions for Northwest salmon.

Professor Mike Brett at the University of Washington’s Environmental Engineering Department is one of the scientists who worries that dumping massive amounts of iron sulfate off Canada’s southwest coast sets a bad precedent.

In July, more than 100 tons of iron dust was dumped into the Pacific off the Haida Gwaii islands, formerly known as the Queen Charlotte Islands.

The group responsible for the fertilization project is the Haida tribe, native to the islands, that operate as the Haida Salmon Restoration Corporation. They said the idea is to generate algae blooms which will bring back the salmon population and it may also help combat global warming and allow them to sell carbon offsets.

“It’s the unintended consequences that people are really worried about,” Brett said. He added that iron compound dumping could cause plankton blooms so massive that they create low oxygen zones that can be deadly to organisms in the surrounding ocean.

“Fundamentally changing the bio-chemical is a risky thing to do, if you don’t know how this experiment is going to turn out – and that’s the real concern,” Brett said.

John Disney, president of the Haida Salmon Restoration Corporation, said the group’s primary concern is the shrinking fish stocks the tribe has lived on for generations. They insist they have not broken any Canadian laws, environmental or otherwise.

The idea for the iron-dumping is based on what happened after a volcanic eruption in Asia in 2008. Hundreds of tons of iron rich dust fell on the nearby ocean, spiking plankton blooms and resulting in a massive influx of salmon.

“What I want to make very clear is that we do not consider micro-nutrient replenishment of a natural substance pollution,” Disney said.

Another wrinkle in the story is the involvement of scientist Russ George who is overseeing the project.

“The argument is, ‘Should we add a spoon full of dust to a kilometer of ocean or not?’,” George asked

George argues that you can fertilize the ocean the same way you would a field and that while there’s no guarantee how this experiment will turn out, he’s confident they’re on to something. And, he says, the stakes are too high to do nothing.

“We have to make sure we restore the health of the ocean so that they can continue to support fish populations and we can continue to inhabit this planet with a healthy ocean -- that’s what we’re trying to do,” he said.

The problem some have with George’s position is that he holds many ocean fertilization patents — they question whether he’s going to report these results honestly or if they’ll be colored by self-interest.

“You want the scientists to just report the data straight up,” Brett said.

The Haida Salmon Restoration Corporation and the Old Masset Village tribe defend their right to try to restore their native waters and they support their project leader.

“Russ has one aim in life -- he wants to make the world a better place — that’s it,” Disney said.

The Haida Salmon Restoration Corporation already touts the fertilization as a success and now that giant plankton blooms are growing off the west coast of British Columbia there is a lot more food for ocean salmon. Concerns remain about the long-term consequences of large-scale ocean fertilization and how it will impact the Canadian environment. An environmental investigation has recently been launched into the project.