KITTITAS COUNTY, Wash. -- Several recreational lands and campgrounds are closed in Kittitas County while deputies continue their search for a murder suspect believed to be hiding in the forest or other rough terrain.

Jorge Alcantara-Gonzalez has been charged with the suspected killing of 41-year-old Ian Eckles of Kent. Eckles vanished weeks ago when he was heading to meet friends for a turkey hunt in the Liberty area of Kittitas County.

The manhunt for Alcantara-Gonzalez began when they found him on a forest road in a Toyota FJ belonging to Eckles. Deputies say a second stolen vehicle found near the suspect was stolen from Fall City and connected to burglaries in the First Creek area south of April in early April.

He ran away and hasn't been found. He was last seen May 26 when he was spooked by a camper and ran away in the Mineral Springs campground off Highway 97 on Blewitt Pass.

Additional closures on the east side of SR97 include the Liberty Campground off Liberty road and Swauk Campground off SR97. The emergency closure order extends until June 15 unless modified or rescinded.

Officials say to review this map before making any plans in the area: 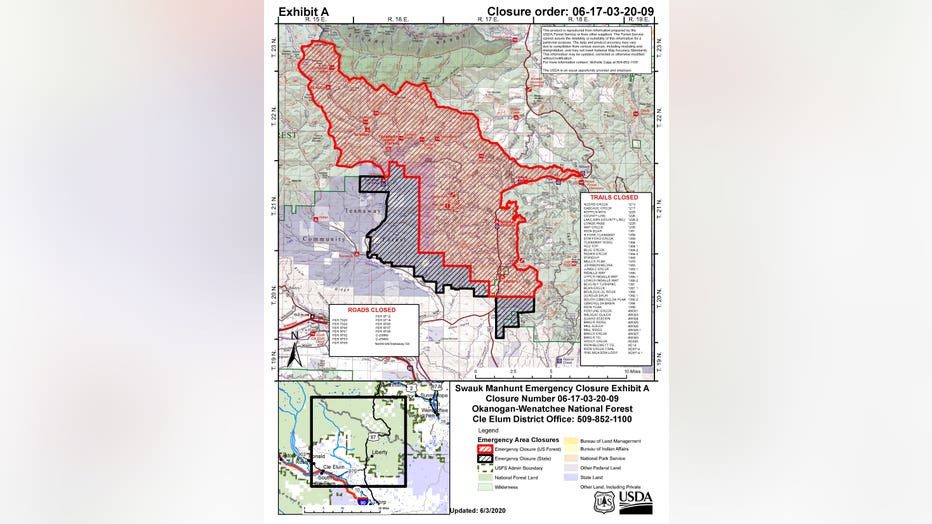 Deputies say he could be hiding in old mine shafts or tunnels, or any of the caves in the rough terrian. He should be considered armed and extremely dangerous.

Immigration and Customs Enforcement officials say Alcantara-Gonzalez is a Mexican national who is in the country illegally.