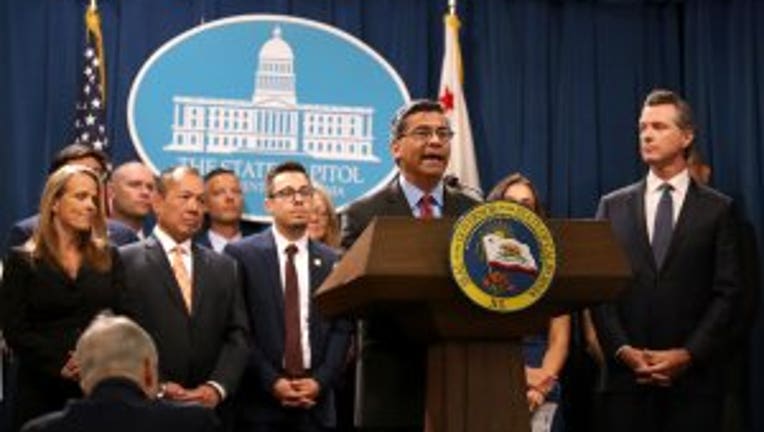 SACRAMENTO, Calif. (AP) — The Democrats who rule California took on homegrown tech giants Uber and Lyft over their workforces, convinced some of the world's biggest automakers to buck the president on fuel emissions and passed a law that could change college sports nationwide.

On issues big and small — hotels soon will be forbidden from providing guests with little plastic shampoo bottles — California this year has marched further left and tried to pull the rest of the country with it.

The state, given the virtual irrelevance of its Republican Party, is pushing the boundaries of liberal policy, forcing Democrats to draw their own lines on the role of government, corporate responsibility and social policies.

America's most populous state (nearly 40 million people) and home to the world's fifth largest economy (about $3 trillion), California has long used its weight to set trends. But that role has crystallized in the Trump era, with the state emerging as the nation's defense system against rollbacks of environmental and health care laws and the federal crackdown on illegal immigration.

Trump, meanwhile, has pointed to California as a cautionary tale for the rest of the nation, casting it as a failed state of homelessness and intrusive government.

"They have to clean it up. We can't have our cities going to hell," Trump told reporters last month after traveling to California to raise money for his re-election campaign.

The leader of the alternative universe is Gov. Gavin Newsom.

The charismatic first-year governor relishes being a Trump adversary and chief of a state that does things before others. Just ahead of the Oct. 13 deadline for him to act on bills, Newsom signed first-in-the nation laws requiring public universities to provide abortion medication on campuses, banning the sale and manufacture of fur products, and mandating a later start time for high schools so students could get more sleep.

"(Trump) has forced us to, I think, either roll over or to assert ourselves and lead," Newsom said in a recent interview with The Associated Press. "I think it's more interesting not just responding and reacting to Trump and Trumpism, but pushing the envelope and moving our agenda and our values forward and promoting them across the country."

Trump lost California by a wide margin in 2016 and has essentially no shot of winning there next year. He's visited several times to tour disaster zones or raise money since he won the presidency, but the state is a far more popular destination for Democrats looking to collect campaign cash from tech and Hollywood donors.

Democrats hold a super-majority in the Legislature, both U.S. Senate seats, 46 of California's 53 U.S. House seats and all statewide offices.

With little influence on policy, Republican state lawmakers can only echo Trump's criticism. They say Democrats are making California prohibitively expensive — millions of people live in poverty and inequality is stark — and wasting money on programs like the $79 billion high-speed rail project that is year's behind schedule.

State Sen. Shannon Grove pointed to gasoline that is at least $1 per gallon more than the national average and worsening homelessness. Los Angeles County now has nearly 60,000 homeless people and in one San Francisco neighborhood exasperated residents recently paid to put boulders on the sidewalks to block people form sleeping there.

"It is frustrating that we continue to battle with the administration on the federal side when we have some serious issues here that need to be taken care of," said Grove, who represents a conservative district spanning southern parts of the state's agriculture-rich Central Valley to the high desert.

Skepticism about some of California's new policies goes beyond partisan grumbling. Many laws Newsom signed this year were vetoed by his predecessor, fellow Democrat Jerry Brown, who called them superfluous or too expensive. Brown blocked the bill requiring college campuses provide abortion medication, arguing the services were readily available elsewhere, and resisted a ban on smoking on state beaches, saying the power of the state should only stretch so far. Other policies, like mandating later school start times, struggled to pass the Legislature in prior years, with critics arguing the new mandate would create headaches for parents and schools.

"I think they spend a lot of time on kind of silly things instead of tackling real problems, like homelessness," said 64-year-old Elizabeth Merrill, a Democrat from Sacramento who has lived in the state for nearly four decades.

Republican Texas Gov. Greg Abbott last year mocked the state, saying "Californians genuinely think that government should run every nuanced detail of your life all the way down to dictating to you what type of straw you should drink from." He was referring to a state law that forbids restaurants from handing out single-use plastic straws unless customers ask for them.

But Christopher Warshaw, an assistant professor of political science at George Washington University, said California is serving as a beacon for other liberal states. New York Gov. Andrew Cuomo recently said any suggestion his left-leaning state lags California gets his "competitive juices flowing." He was speaking about a California law designed to force Uber, Lyft and other so-called gig companies to give more wage and benefit protections to their workers.

The tech giants aggressively fought the legislation but Democratic lawmakers showed no shyness in taking on the companies that call Silicon Valley home, making the calculation that labor unions were a more powerful political ally.

Under the legislation signed by Newsom, California now provides the strictest test in the nation for determining when a worker is an employee versus an independent contractor.

All of the major presidential contenders except moderate Joe Biden backed the gig-worker law. Home-state Sen. Kamala Harris and others cheered for the passing of a law to phrase out private prisons. As the race for the Democratic presidential nomination becomes a tug-of-war between the party's liberal and moderate wings, hopefuls are cautiously weighing in on California policy.

California's ideas could someday be tested on the presidential stage. Newsom has been seen as a potential White House hopeful since 2004 when, as mayor of San Francisco, he let gay couples marry in defiance of federal law.

Charlie O'Connell, a 38-year-old from San Francisco, said he doubts the rest of the nation wants what California has to offer. A registered Democrat and self-described liberal, O'Connell said even he thinks Democrats sometimes push the wrong priorities.

"(Newsom's) got some good ideas," said O'Connell, who owns a spirits company. But "if he thinks he can apply what works here to other states, that's going to be rough."

Still, Newsom is building a record to tout. His administration this year convinced Honda, Ford and several other car companies to side with California instead of the Trump administration on reducing emissions standards.

Under former President Barack Obama, the federal government moved to align with California's standards. But Trump is now weakening the rules and recently took away California's authority to keep its own, stricter standards. Critics say Trump's move is retaliation against California for fighting his administration.

"We are not a small, isolated state. We can assert ourselves at scale," Newsom said. "We can move markets when it comes to emission standards and automobile manufacturing — not just for this country, but the rest of the world."