Cargo ship congestion may have played a part in a massive oil spill that has closed several beaches along the Orange County coast.

HUNTINGTON BEACH, Calif. - Investigators searching for the cause of an oil pipeline break off the Southern California coast have pointed to the possibility that a ship anchor dragged the line across the seabed and cracked it, but two videos released so far provide only tantalizing clues about what might have happened 100 feet below the ocean surface.

A Coast Guard video released Thursday appears to show a trench in the seafloor leading to a bend in the submerged line, but experts offered varied opinions of the significance of the brief, grainy shots. An earlier video revealed a 13-inch (33-centimeter) rupture in the line, but the pipe showed no evidence of damage that they said would be expected from a collision with a multi-ton anchor from cargo ships that routinely move through the area off the ports of Los Angeles and Long Beach.

The slight bow in the line displayed in one video "doesn’t necessarily look like anchor damage," Frank G. Adams, president of Houston-based Interface Consulting International, said in an email. When a pipeline is hit by an anchor or other heavy object "that typically results in physical damage that may lead to a fracture."

Ramanan Krishnamoorti, a petroleum engineering professor at the University of Houston, said he considered the video that runs along a bend in the line "revealing."

"It seems to me you’ve got something that was dragged in the sand that might have impacted the pipeline," he said. However, he remained puzzled that the leak came from a crack and not a larger gash, assuming it was hit by an anchor or some other object. 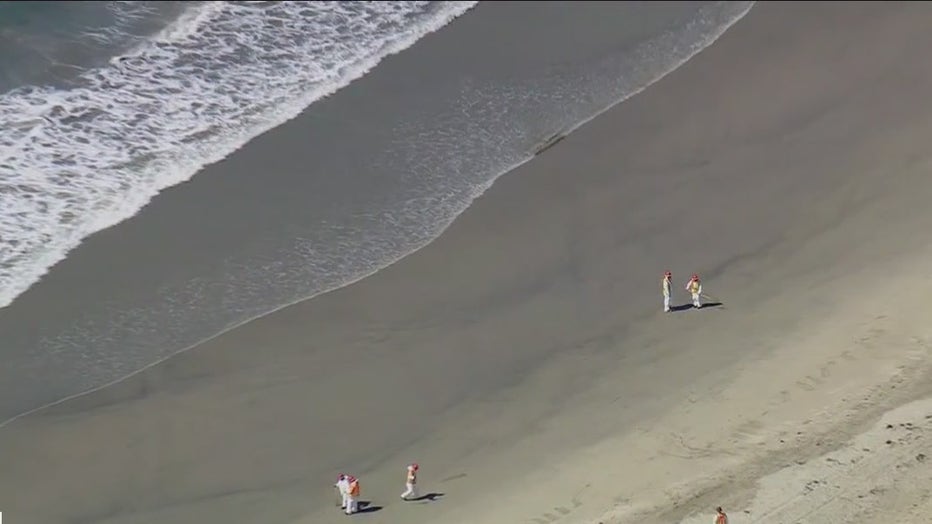 Key questions remain: Could the line have been hit days before the leak started? What ship is responsible? And if a ship anchor is not the culprit, what else could it be?

Investigators, meanwhile, continued to hunt for the cause of the break that spilled tens of thousands of gallons of crude oil off the famed surf breaks of Huntington Beach, as well as determine what happened in the crucial early hours after reports of a possible oil spill first came in.

The 13-inch-long (33-centimeter), narrow gash seen in one video could explain why signs of an oil slick were seen Friday night, but the spill eluded detection by the pipeline operator until Saturday morning, experts said.

"My experience suggests this would be a darned hard leak to remotely determine quickly," said Richard Kuprewicz, a private pipeline accident investigator and consultant. "An opening of this type, on a 17-mile-long (27-kilometer) underwater pipe is very hard to spot by remote indications. These crack-type releases are lower rate and can go for quite a while."

When pipes experience a catastrophic failure, the breach typically is much bigger, what’s referred to in the industry as a "fish mouth" rupture because it gapes wide like the mouth of a fish, he said.

Amplify Energy, a Houston-based company that owns and operates three offshore oil platforms and the pipeline south of Los Angeles, said it didn’t know there had been a spill until its workers detected an oil sheen on the water Saturday at 8:09 a.m.

The cause of the spill is under investigation by numerous agencies as the cleanup continues along miles of shoreline on the Orange County coast south of the sister ports.

The Coast Guard on Thursday said it is investigating the incident with other agencies as a "major marine casualty" due to the potential involvement of a vessel and damages exceeding $500,000. It said they will determine if criminal charges, civil penalties or new laws or regulations are needed.

The leak occurred about 5 miles (8 kilometers) offshore at a depth of about 98 feet (30 meters), investigators said. A 4,000-foot (1,219-meter) section of the pipeline was dislodged 105 feet (32 meters), bent back like the string on a bow, Amplify’s CEO Martyn Willsher has said.

Jonathan Stewart, a professor of civil and environmental engineering at the University of California, Los Angeles, said he was surprised the damage wasn’t more severe given how far the pipe was moved.

"My first reaction when I heard that it is displaced so far was that it’s remarkable that it’s even intact at all," Stewart said.

Moving a large section of pipe up to 105 feet (32 meters) would have caused "bending deformations" – tension on the side that was stretched into a semicircle, with compression on the other, as it was bent inward, Stewart said.

It’s possible such pressure alone could result in a break, though Stewart said there is too little information to make a conclusion about the cause. It’s possible a sharp section of anchor could pierce the pipeline but "you could still have damage just from the bending."

"Because it’s pulling on the pipe, you create these bending stresses in the pipe, which could eventually become large enough that they rupture it," he said.

Questions remain about when the oil company knew it had a problem and delays in reporting the spill.

A foreign ship anchored in the waters off Huntington Beach reported to the Coast Guard that it saw a sheen longer than 2 miles (3 kilometers) just after 6 p.m. A satellite image shot by the European Space Agency indicated a likely oil slick in the area around 7 p.m., which was reported to the Coast Guard at 2:06 a.m. Saturday after being reviewed by a National Oceanic and Atmospheric Administration analyst.

Federal pipeline safety regulators have put the time of the incident at 2:30 a.m. Saturday but say the company didn’t shut down the pipeline until 6:01 a.m. and didn’t report the leak to the Coast Guard until 9:07 a.m. Federal and state rules require immediate notification of spills.

Willsher, who took questions alongside Coast Guard and other officials over four days, did not show up at Thursday’s news conference. Other officials declined to explain his absence.

The type of crack seen in the Coast Guard video is big enough to allow some oil to escape to potentially trigger the low pressure alarm, Kuprewicz said. But because the pipeline was operating under relatively low pressure, the control room operator may have simply dismissed the alarm because the pressure was not very high to begin, he said.

Because the line is encased in concrete — a means of keeping it weighted down on the sea floor — the Coast Guard videos don’t reveal the condition of the half-inch-thick steel pipe underneath.

Once federal safety investigators cut out the damaged section of pipe and remove it, they will be able to conduct a closer examination, looking for signs of corrosion, metal fatigue or other anomalies that would have made it more susceptible to failure. That examination should also reveal if the crack grew larger over time, Kuprewicz said.