Clean up crews work at Huntington Beach after oil spill

Crews worked to clean up oil from a massive spill off the coast of Orange County, California, at Huntington Beach, footage posted on Oct. 4 shows. (Credit: Nicholas Awesomepants via Storyful)

HUNTINGTON BEACH, Calif. - Authorities say the pipeline that leaked tens of thousands of gallons oil into the water off Southern California was split open and apparently dragged along the ocean floor.

Coast Guard Capt. Rebecca Ore said Tuesday that divers determined about 4,000 feet (1,219 meters) of the pipeline was "laterally displaced" by about 105 feet (32 meters). She did not say what might have caused the displacement.

Officials said Monday that they were considering whether a ship’s anchor might have caused the oil spill that has fouled beaches in Orange County. There was no confirmation Tuesday that the leak was caused by an anchor.

The pipeline had a 13-inch gash in it, Ore said. 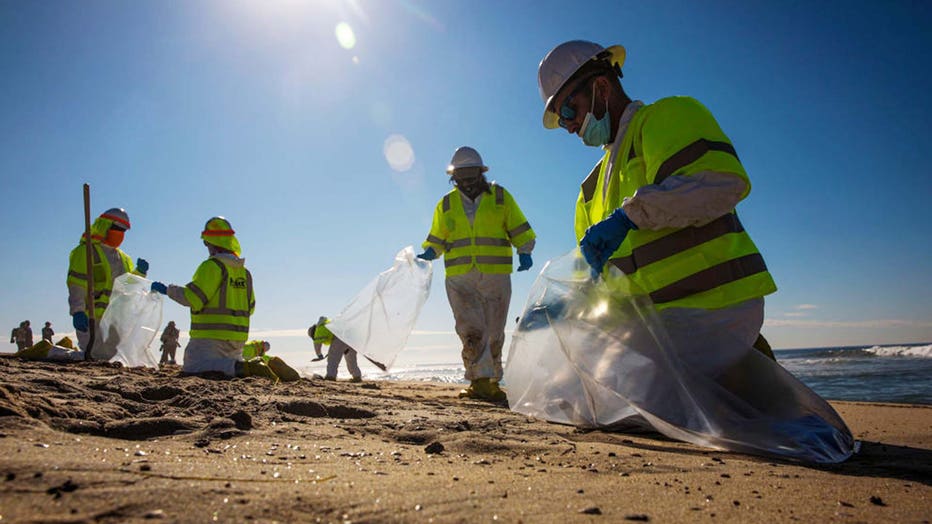 FILE - Crew from Patriot Environmental Services busy in cleaning remnants of oil from a massive spill off the Orange County along the beach on Tuesday, Oct. 5, 2021 in Huntington Beach, Calif.

RELATED: California oil spill: 4,000-foot section of pipeline split, dragged out of place by up to 105 feet

According to earlier reports, the Coast Guard did not investigate initial reports of an oil spill for nearly 12 hours because it didn't have enough corroborating evidence and was hindered by darkness and a lack of technology, an official told The Associated Press on Tuesday.

Rear Admiral Brian Penoyer acknowledged that the Coast Guard was alerted Friday night by a "good Samaritan" that there was a sheen on the water. It put out a broadcast to the many cargo and tanker ships anchored off the Los Angeles and Long Beach ports seeking more information, but did not receive any supporting reports.

Penoyer said it was common to get reports of a sheen near a busy seaport. It would take more than 12 hours before an oil pipeline company reported a spill that could be up to 126,000 gallons (572,807 liters) of heavy crude.

"In hindsight, it seems obvious, but they didn’t know that at that time," Penoyer said. "So putting yourself in the position of what they did know, this is a very normal process."

Tar washed up onto the shoreline of Newport Beach on Oct. 4 as crews worked to clean up oil from a massive spill off the coast of Orange County, Calif. (Credit: @DingoSaidSo via Storyful)

Officials imposed more restrictions on Southern California beaches Tuesday in response to a large oil spill while more questions emerged about whether the accident was swiftly reported to the Coast Guard and other authorities.

Signs were posted on the famous Huntington Beach declaring that the beach was open but that the ocean and shore were closed. On a typical day, surfers would usually be seen bobbing in the waves, but not now. Huntington State Beach still had an oily smell, although it was less severe than the stench emanating from the water on Sunday.

Elsewhere, Orange County officials closed the Dana Point Harbor and a beach for small children. Those closures are in addition to other Dana Point beaches and all beaches in Laguna Beach.

The restrictions were announced a day after oil spill reports reviewed by The Associated Press raised questions about the Coast Guard’s response to one of the state’s largest recent spills and about how quickly Amplify Energy, the company operating three offshore platforms and the pipeline, recognized it had a problem and notified authorities.

The Coast Guard received the first report of a possible oil spill more than 12 hours before the company reported a major leak in its pipeline and a cleanup effort was launched, records show.

Two early calls about the spill came into the National Response Center, which is staffed by the Coast Guard and notifies other agencies of disasters for quick response. The first was from an anchored ship that noticed a sheen on the water. The second came six hours later from a federal agency that said a possible oil slick was spotted on satellite imagery, according to reports by the California Office of Emergency Services.

The spill sent up to 126,000 gallons (572,807 liters) of heavy crude into the ocean off Huntington Beach, and it then washed onto miles of beaches and a protected marshland. The beaches could remain closed for weeks or longer, a major hit to the local economy. Coastal fisheries in the area are closed to commercial and recreational fishing.

Federal and state authorities require rapid reporting of a spill. Failure to do so has led to criminal prosecutions of companies, including Plains All American Pipeline, which caused a coastal spill near Santa Barbara in 2015, and Southern California Gas Co. for a massive well blowout later that year.

Meanwhile, Coast Guard officials said Monday that investigators were looking into whether a ship’s anchor may have struck a pipeline on the ocean floor.

Amplify Energy CEO Martyn Willsher said company divers were inspecting the area of the suspected leak reported Saturday, and he expected that by Tuesday there would be a clearer picture of what caused the damage. Willsher said an anchor from a cargo ship striking the pipeline is "one of the distinct possibilities" behind the leak.

Orange County Supervisor Katrina Foley expressed concern that the company could withhold evidence. But the county’s emergency manager, Michelle Anderson, reassured the Board of Supervisors on Tuesday that the Coast Guard was on the scene as well to make sure the probe is independent.

"It is an investigation with objective parties involved, so that we will eventually know the outcome," Anderson said.

RELATED: Beaches closed as crews attempt to clean up shoreline

Cargo ships entering the twin ports of Los Angeles and Long Beach routinely pass through the area. Backlogs have plagued the ports in recent months, and several dozen or more of the giant vessels have regularly been anchored as they wait to enter the ports and unload.

A foreign ship anchored off the coast witnessed an "unknown sheen in the water near their vessel" at 6:13 p.m. and the report was called into the response center just after 8:22 p.m., according to the state report.

Harrison, a retired Coast Guard captain, said the ship was not involved in the spill and was later given clearance over the weekend to enter the port to refuel after determining it was not contaminated by the slick.

"Although there were numerous vessels within immediate proximity to the anomaly, none were clearly associated with the anomaly," the report said. "These factors prevented the possible identification of a point source."

The company that operates the pipeline first reported the spill to the Coast Guard’s response center at 8:55 a.m. Saturday. However, the report said the incident occurred at 2:30 a.m.

A 2016 spill response plan for the Amplify platforms submitted to federal regulators called for immediate notification of federal officials when more than one barrel of oil is released into the water. Releases greater than five barrels — or that threaten state waters or the shoreline — require immediate notification of the state fire marshal and California wildlife officials.

The pipeline was supposed to be monitored under an automated leak detection system that would report problems to a control room staffed around the clock on the oil platform known as Elly.

The system was designed to trigger an alarm whenever a change in the flow of oil is detected. But how fast it can pick up on those changes was expected to vary according to the size of the leak. For a large leak — 10% or more of the amount of oil flowing through the pipeline — the detection time was estimated at five minutes. Smaller leaks were expected to take up to 50 minutes to detect, according to the response plan.

The spill plan warned that a break in the pipeline could cause "substantial harm to the environment" and that in a worst-case scenario 3,111 barrels (131,000 gallons) of oil could be released from the pipeline.

Willsher said required agencies were notified "instantly" when the company recognized the leak was from its pipe. Records show the spill was not reported by Amplify Energy, but by Witt O’Brien’s, a crisis and emergency management firm listed on the spill response plan as the point of contact to notify the NRC.

The report said the leaking pipe had been shut off, but containment was not confirmed.

Potential criminal investigations were being pursued by the Orange County district attorney, the U.S. Department of Justice, the Coast Guard and the California Department of Fish and Wildlife, officials said.

Safety advocates have pushed for years for federal rules that would strengthen oil spill detection requirements and force companies to install valves that can automatically shut down the flow of crude in case of a leak. The oil and pipeline industries have resisted such requirements because of the high cost.