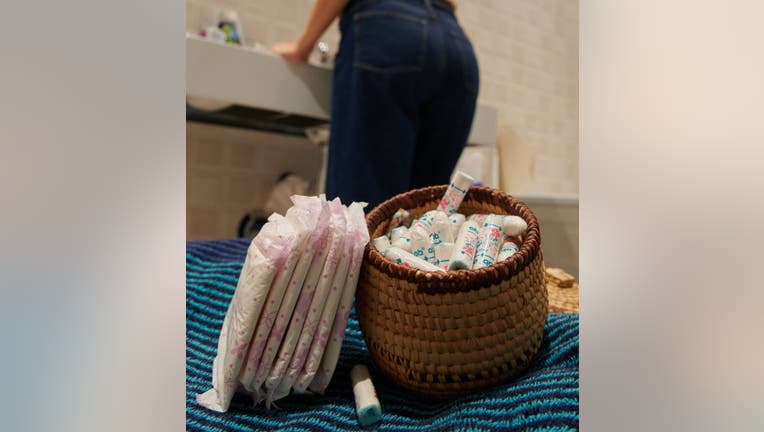 ILLUSTRATION - 29 November 2020, Berlin: Sanitary towels and a basket of tampons stand on a shelf while a woman stands at the sink. Photo: Annette Riedl/dpa (Photo by Annette Riedl/picture alliance via Getty Images)

SACRAMENTO, Calif. - California public schools and colleges would have to stock their restrooms with free menstrual products under legislation sent Thursday to Gov. Gavin Newsom as women’s rights advocates push nationwide for affordable access to pads, tampons and other items.

Several other states were considering or have required free menstrual products in public schools, according to advocacy group Women’s Voices for the Earth. Purdue University in Indiana decided last year to offer free feminine hygiene products in campus bathrooms.

Garcia also had prompted California to follow the lead of at least 10 states by exempting menstrual products from sales taxes, which she said cost women a collective $20 million a year as other health items like erectile dysfunction medication were exempt.

The advocacy group says more than half the states still tax menstrual products as a "luxury" item. Worldwide, many countries have eliminated such taxes, including Britain, Australia, Canada and India.

The new California legislation expands the 2017 law to grades 6 to 12, community colleges and the California State University and University of California systems, starting in the 2022-23 school year. It encourages private schools and colleges to follow suit.

There were no registered opponents and few opposition votes.

"Often periods arrive at inconvenient times. They can surprise us during an important midterm, while playing with our children at a park, sitting in a lobby waiting to interview for a job, shopping at the grocery store, or even standing on the Assembly floor presenting an important piece of legislation," Garcia said in a statement.

Convenient access, she said, "would alleviate the anxiety of trying to find a product when out in public."

She said her measure was inspired by Scotland, which last year declared access to menstrual products to be a human right and required public places to provide them free of charge.

Ideally, Garcia said, menstrual products would be as common in restrooms as toilet paper and paper towels.