SACRAMENTO, Calif. - Homicides in California jumped 31% last year, making it the deadliest year since 2007, and Black people accounted for nearly one-third of all victims as the most populous state struggled with the coronavirus pandemic and concerns over racial injustice, according to reports released Thursday.

That's the most slayings since 2,258 people were killed in 2007, and the rate is the highest since 2008. Black people make up 6.5% of California’s population but accounted for 31% of all victims last year. Hispanic people accounted for 45%, while 16% were white.

Last year saw such a stark increase in homicides in part because the number and rate of homicides the year before were so low.

California’s 2019 homicide rate was the lowest since 1966, and violent and property crime rates in 2019 generally were among the lowest since the 1960s, four experts from the University of California, Berkeley’s California Policy Lab said in a related review focusing on cities with more than 100,000 people.

California cities generally did better than those in other states that saw bigger per capita increases in homicides and aggravated assaults, experts said.

Yet last year, California had nearly 300 more homicides than the next most deadly year in the last decade — 2016, which had 1,930 slayings, according to annual reports from the state attorney general's office. 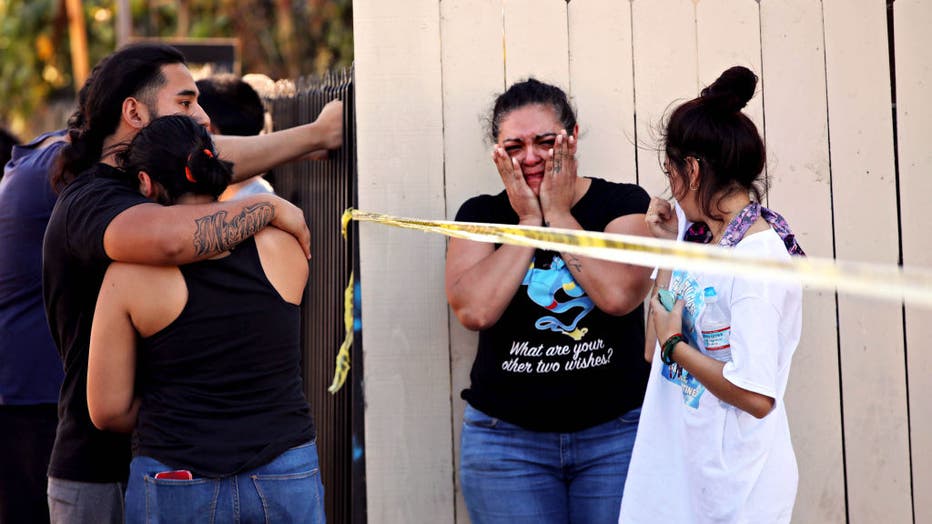 OAKLAND, CA - OCT. 14: Loved ones grieve after a fatal shooting occurred in the 1900 block of 84th Ave. in Oakland, Calif., on Wednesday, October 14, 2020. The event left three shooting victims, with two fatalities. This incident marks the 77th and 7

Attorney General Rob Bonta said it’s unclear why homicides jumped, but he drew a connection to a 65.5% increase in sales of handguns and 45.9% increase in long-gun sales last year. The 686,435 handguns sold was a record, while the 480,401 rifles and shotguns was second only to 2016.

Nearly three-quarters of 2020 homicides involved a firearm, up from 69% a year earlier, while domestic violence-related calls for assistance involving a firearm rose 42%.

"We can safely say that the pandemic had a monumental impact on daily life," Bonta said while promoting more use of gun violence restraining orders to take firearms from those who may use guns to harm themselves or others.

"With more weapons, more economic stagnation, more desperation, I think those are all potential components and drivers of where we are today."

He noted that California has some of the nation’s toughest firearm laws and most people use their weapons properly, but said the data shows there is still much to do.

More than a third of homicides resulted from an argument, 28% were gang-related, nearly 7% related to domestic violence, and 8.5% were connected to a rape, robbery or burglary, his office reported.

Even with the dramatic jump in homicides, there was still a less than 1% increase in overall violent crime, according to the state reports. That's because robberies dropped about 14% and rapes 8%, though aggravated assaults were up nearly 9% and arsons 43%.

Meanwhile, property crimes dipped 7.7% during the coronavirus pandemic, led by a nearly 15% drop in larceny thefts and 4% drop in burglaries. But motor vehicle thefts jumped nearly 20% and arsons 43%.

The pandemic and its accompanying stay-at-home orders and other restrictions led to erratic changes in crime patterns last year, the UC Berkeley experts said in a report to Gov. Gavin Newsom’s Committee on the Revision of the Penal Code.

"Social dislocations, stresses, and alterations to our collective daily routines due to the pandemic have impacted crime rates in California and across the country," they said.

They cited reduced social interactions from the stay-at-home orders as the likely reason for drops in robbery, rape and larceny.

They pinned the timing of the changes in criminal behavior directly to California’s first-in-the-nation stay home order when they took a closer look at the changes in Los Angeles, the state’s largest city.

"A return to normalcy post-pandemic may also rebalance California’s crime landscape," the San Francisco-based Center on Juvenile and Criminal Justice, which favors criminal justice reforms, said in a report based on the same large city data. "2020 offers a unique window into the effects of isolation, job loss, business failure, and collective grief on community safety."