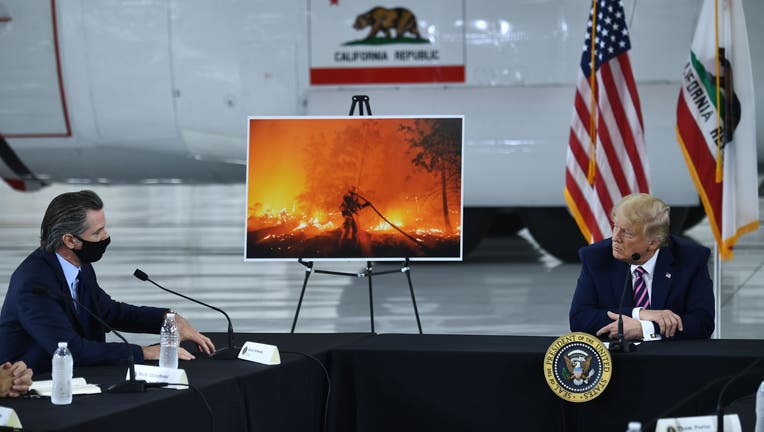 But Newsom dropped the fiery tone he has employed in recent weeks about climate change and its role in five of the largest fires California has ever seen. Instead, he engaged the president in a respectful conversation that included both men hailing their good relationship.

Just last week, Newsom declared he had “no patience for climate-change deniers,” saying people must “disabuse ourselves of all the BS that’s being spewed by a very small group of people.” On Monday, Newsom told Trump they “can agree to disagree” on climate change and asked him to “please respect ... the difference of opinion out here.”

“We’ve known each other too long and, as you suggest, the working relationship I value,” Newsom told Trump during a meeting at McClellan Park, a former Air Force base near Sacramento. “We come from a perspective, humbly, where we submit the science is in and observed evidence is self-evident that climate change is real.”

Trump and Newsom have butted heads repeatedly during both men’s first terms in office. Last year, Newsom was fond of saying that he was proud California is “the most un-Trump state in America.” And in February, during Trump’s previous visit to the state, the president told a group of California farmers he would pressure Newsom to give them more water or else “you’re going to get a new governor.”

But Newsom has been noticeably reluctant to criticize Trump publicly since the start of the coronavirus pandemic, as California has relied heavily on aid from the federal government to respond to the crisis and balance its budget. That has continued during wildfire season, when the state has applied for and received federal grants to fight massive fires that have so far burned more than 3.2 million acres.

Newsom even thanks Trump during his weekly news conferences — comments that have ended up in some of Trump’s political ads.

“We actually have a very good relationship. Good man,” Trump said of Newsom on Monday.

“That was an opportunity to remind him of a point he’s very familiar with, but to do so in an honest and forthright way,” Newsom said while visiting Camelot Equestrian Park in Oroville.

Newsom’s cautious approach is part of managing the state’s necessary relationship with a temperamental commander-in-chief, says Kathryn Phillips, director of the Sierra Club of California.

“What essentially is happening is that Newsom is having to be, in a way, a sacrificial lamb,” Phillips said. “He’s the one who has to be very gentle with the president, even though I have no doubt that he disagrees with him on just about everything.”

That gentleness in approach does not necessarily extend to others in the Newsom administration. On Monday, Newsom praised the Trump administration for partnering with California to reduce wildfire risks on 500,000 acres of forest land per year.

Wade Crowfoot — Newsom’s natural resources secretary — implored Trump and his administration to not “put our head in the sand and think it’s all about vegetation management,” referencing the state’s rising temperatures that are making wildfires more destructive.

“I wish science agreed with you,” Crowfoot answered back.

“I don’t think science knows, actually,” Trump said, before moving on to talk to someone else.

“It’s easier for somebody who is not the governor to say that,” Phillips said.

While wildfires have burned across the West Coast for weeks now — killing at least 35 people — they’ve received little attention in the race for president. That’s changing this week. Democratic vice presidential nominee Kamala Harris is traveling to California on Tuesday to get a briefing on the wildfires and presidential nominee Joe Biden also has begun focusing on climate change.

During Trump’s visit Monday, he awarded the Distinguished Flying Cross to some National Guard soldiers who rescued people from wildfires last week. Asked by a reporter why it took him nearly three weeks to publicly acknowledge the fires, Trump called it a “nasty question.”

“I declared it an emergency. I gave an emergency declaration,” Trump said. “Don’t tell me about not doing.”