SEATTLE -- The city of Kirkland has asked all business owners to close, the Alderwood Mall and surrounding roads are closed, and the downtown courthouse has shuttered ahead of potential protests this afternoon and tonight.

In Kirkland, city officials are asking businesses to close by 1 p.m., while residents and visitors are asked to avoid downtown or commercial shopping areas after 1 p.m.

“We are receiving reports that Kirkland is a possible target for looting and destruction,” said City Manager Kurt Triplett. “Out of an abundance of caution we’re encouraging these precautionary measures to help prevent any criminal activity that could cause further damage to our local businesses and community.” 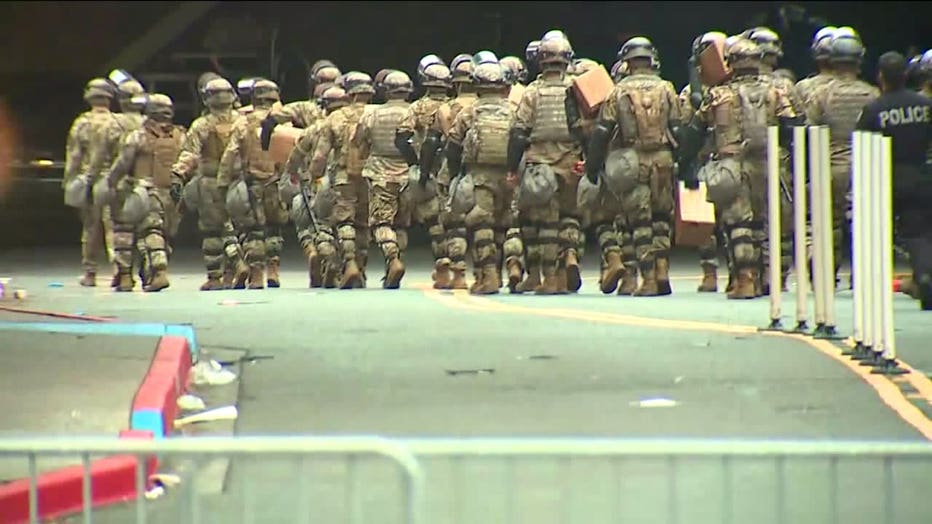 State troopers briefly closed I-5 between I-90 and SR 520 due to a march headed through downtown Seattle. It was closed for less than 2 hours.

"We have become aware of potential groups bent on causing property damage and theft at the Alderwood Mall, similar to what we have seen in other neighboring jurisdictions in the Puget Sound region," the city of Lynnwood said in a news release.

Barricades have been put up around the mall as a precaution.

In Seattle, King County Superior Court in downtown, along with ITA Court and the Children and Family Justice Center, have evacuated and closed their doors ahead of planned protests at 3 p.m. Monday.

Officials later said the courthouse and the Regional Justice Center in Kent were closed because of a threat made to King County buildings.

For the third consecutive day, Seattle has imposed a citywide curfew. It will start at 6 p.m. and last through 5 a.m. Tuesday.

"It's not something any city does lightly," Mayor Jenny Durkan said during a Monday afternoon press conference held to discuss preparations.

The University of Washington sent out an alert Monday afternoon advising about a possible protest in the UVillage area this afternoon. Police said avoid the area if you can.

Renton city officials are also planning for possible disruptions at a 3 p.m. protest at Renton City Hall. The city says there will be a curfew in effect again tonight. Details are forthcoming.

Protests planned for this afternoon will mark the fourth day in a row that people have gathered locally and nationally to rally against the death of George Floyd, a black man who died in police custody after he was pinned down for almost 9 minutes by a white officer.

The officer, Derek Chauvin, has been charged with third-degree murder and manslaughter.

Seattle Police have released a timeline of the events that led to widespread rioting and looting on Saturday. Some 10,000 people marched peacefully throughout the day until outside groups came in and took advantage of peaceful rallies to cause destruction and chaos.

Hundreds of businesses and buildings were damaged, police cruisers were burned, and officers were injured. There were 57 arrests.

A few hours later, looters tried to take over Southcenter Mall in Tukwila, but officers were able to stop them. They moved to a shopping center across the street, destroying storefronts, stealing thousands of dollars in merchandise and looting a nearby Target.