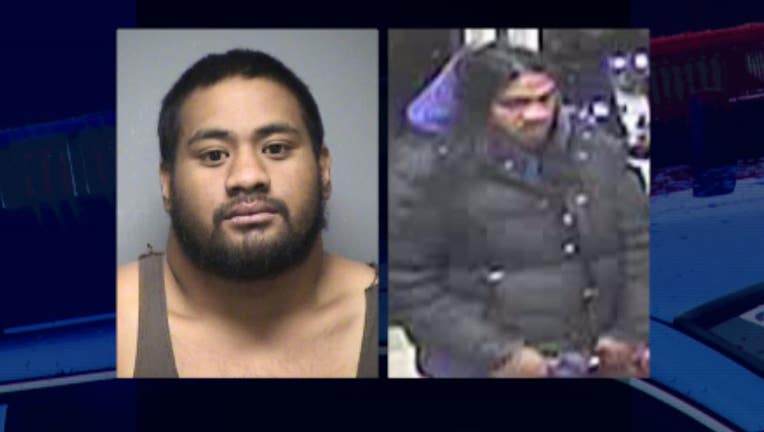 FUGITIVE CAPTURED January 6, 2016 -- Burien Police arrested Fuelafo Mauga on Wednesday night. FUGITIVE UPDATE December 18, 2015 -- Seattle Police say Crime Stoppers tips from Washington’s Most Wanted viewers identified the suspect as Fuelafo Mauga after we aired video last week of an armed robbery in West Seattle on November 30th. "We're paying for the identification, but the good news is, if you know his whereabouts, you're going to get a cash reward of up to $1,000 too. Keep in mind, this guy's dangerous. He was the one with the gun. If you know anything about him or where he's at, now's the time to call the hotline,” says Ret. Det. Myrle Carner with Crime Stoppers of Puget Sound. Detectives believe he is somewhere in West Seattle or the White Center area. If you know where he’s hiding, call an anonymous tip into: CRIME STOPPERS: 1-800-222-TIPS You must call the Crime Stoppers hotline with your tip to be eligible to receive a cash reward for information leading to a fugitive’s arrest. CLICK HERE for information on how to TEXT A TIP to Crime Stoppers

FUGITIVE WANTED IN SEATTLE December 11, 2015 -- Seattle Police are hoping you can identify the suspect who held up a 7-Eleven clerk at gunpoint. Detectives say he came into the store on SW Holden St. in West Seattle on November 30th with two other guys, then loitered around until all the customers were gone, before whipping out a gun and robbing the place. Cops found the other two guys but need your help with this one. Detectives say he goes by 'Fue' but that's not his real name and he is considered ‘armed and dangerous. "The suspect that we're mostly concerned about is wearing a big puffy coat,” says Ret. Det. Myrle Carner with Crime Stoppers of Puget Sound. “You'll see him because he's the guy with the handgun, you'll see him walking with the gun, ordering the clerk to go around to the back of the till, takes him to the till and actually pushes him out of the way. At this point the clerk raises his hand and you'll see that on the video. Then, the suspect proceeds to help himself to some cigarettes, he takes all of the money out of the till and then walks nonchalantly out of view outside and all three suspects get into a stolen vehicle. The stolen vehicle has been recovered and two of the suspects are known. The guy we want to know is the guy with the gun. He's the most dangerous one in this case.”

Detectives think he is 6'1" to 6'2", about 220 pounds and known to frequent the White Center area of King County. Again, he has a possible name of ‘Fue,’ but Seattle Police have no idea what his real name is or where to find him. If you have any information that can help track him down, call an anonymous tip into: CRIME STOPPERS: 1-800-222-TIPS You must call the Crime Stoppers hotline with your tip to be eligible to receive a cash reward for information leading to a fugitive’s arrest. CLICK HERE for information on how to TEXT A TIP to Crime Stoppers