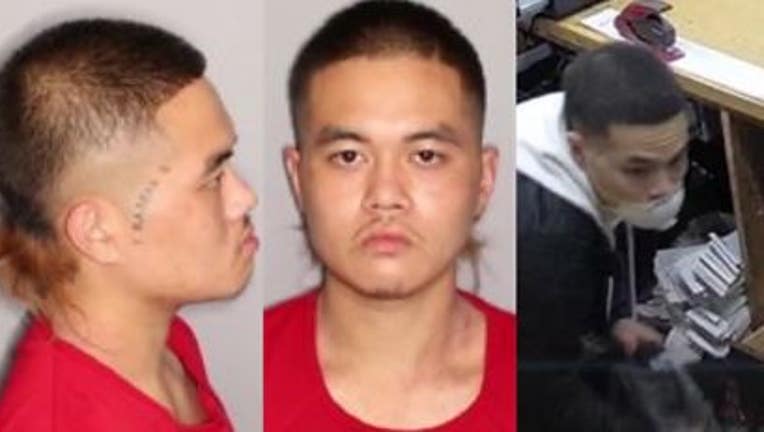 WHITE CENTER, Wash. - King County Sheriff’s detectives are asking for the public’s help to locate the suspect accused of ramming a stolen green Chrysler Town and Country minivan through the front doors of Grocery Plus in White Center on February 20th at about 10:25 p.m.

Detectives say he then stole cigarettes and lottery tickets from the business. Damage to the store was estimated at $20,000.  The stolen minivan was later recovered by Seattle Police.

"Here we have Grocery Plus, just serving the White Center community at a time when the pandemic has been so hard on small business. This burglary has been devastating to them, not only the property loss but just the trust. They’re there and they serve. They deserve better than this and I am so glad detectives were able to identify a suspect and I know, together, we’re going to be able to get him into custody," said King County Sgt. Tim Meyer.

Detectives have identified the suspect as 26-year-old Tylor Pone Saeteurn. He is wanted for Burglary 2nd Degree. He is 5’07", 155 pounds and was last known to live in Renton.

Saeteurn has a tattoo on the right side of his face that says, ‘T Rascal G", which stands for Tiny Rascal Gangsters. His most recent conviction is for Residential Burglary and Taking a Motor Vehicle Without Permission. He has active warrants for Possession of Drug Paraphernalia in Algona and DUI in Seattle.

Crime Stoppers of Puget Sound is offering a cash reward of up to $1,000 for information that leads to the arrests of Tylor Saeteurn.

"We’re asking anyone who knows his location to please use the P3 Tips App, get ahold of us, share those tips and let’s get him in custody," said Meyer.

Deputies have identified a suspect who rammed a stolen minivan into a White Center grocery store in February, then stealing goods from inside the store.