"An attack on one is an attack on all," the governor said a day after a gunman killed 10 people and injured 3 others in a racially motivated attack.

A Tops supermarket employee who survived the Buffalo, New York, mass shooting on Saturday alleged that a 911 dispatcher hung up on her while she was trying to get help, according to local reports.

The dispatcher has been placed on administrative leave "pending a disciplinary hearing" that is expected to happen during the week of May 30, when "termination will be sought," Erie County office of the Executive press secretary Peter Anderson told Fox News Digital.

An internal investigation into the incident began the day after the shooting on May 15, and the individual was placed on administrative leave on May 16, Anderson said. 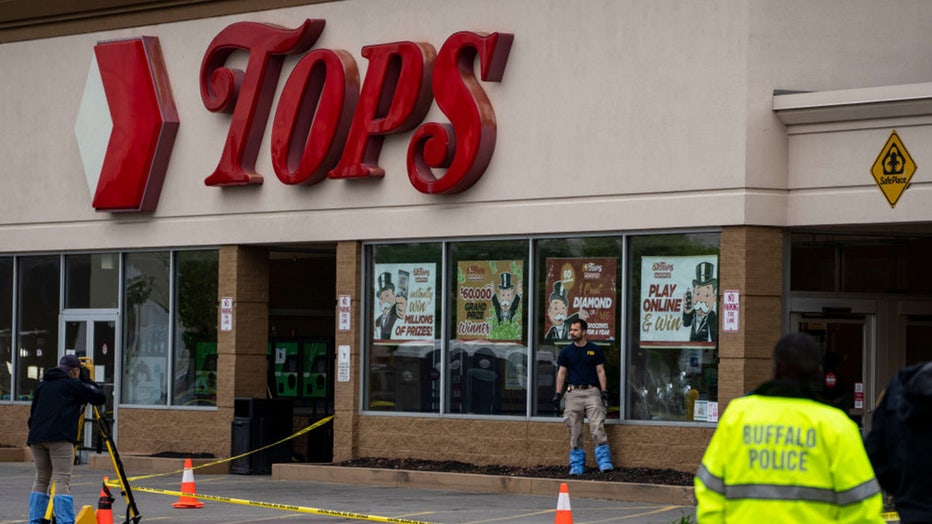 FILE - Bullet holes are seen in the window of Tops Friendly Market at Jefferson Avenue and Riley Street, as federal investigators work the scene of a mass shooting on Monday, May 16, 2022 in Buffalo, NY. (Kent Nishimura / Los Angeles Times via Getty Images)

"Of note, the employee[']s action had no bearing on the dispatching of the call. The first call was dispatched for an immediate police response in approximately 30 seconds," Anderson added.

A Tops employee named Latisha told WGRZ that when an 18-year-old shooting suspect arrived at the supermarket on the afternoon of May 14 and began his rampage that eventually killed 10 Black individuals in what FBI Director Christopher Wray is calling "a hate crime and an act of racially motivated violent extremism," she tried to call 911 for help.

"I tried to call 911, and I was whispering because I could hear him close by," Latisha told the outlet. "And when I whispered on the phone to 911, the dispatcher started yelling at me, saying, 'Why are you whispering? You don't have to whisper.' And I'm trying to tell her, like, 'Ma'am, he's in the store. He's shooting. It's an active shooter. I'm scared for my life.' And she said something crazy to me, and then she hung up in my face. And I had to call my boyfriend to call 911."

Erie County's Central Police Services did not immediately respond to an inquiry from Fox News Digital.

Fox News Digital has requested records of the 911 call through a Freedom of Information Law (FOIL) request, though WGRZ noted that such calls are rarely released to media in New York State.

Suspect Payton Gendron is accused of fatally shooting 10 people Saturday afternoon and livestreaming the alleged hate crime attack on Twitch. Three other people were injured. Eleven of the victims were Black, according to city police, and he is accused of posting a 180-page document online explaining his plan and motives.

Authorities charged Gendron with first-degree murder in Buffalo City Court. He was arraigned late Saturday and pleaded not guilty. The judge ordered him held without bail, and he is due back in court on Thursday. Prosecutors have hinted that additional charges will be forthcoming.