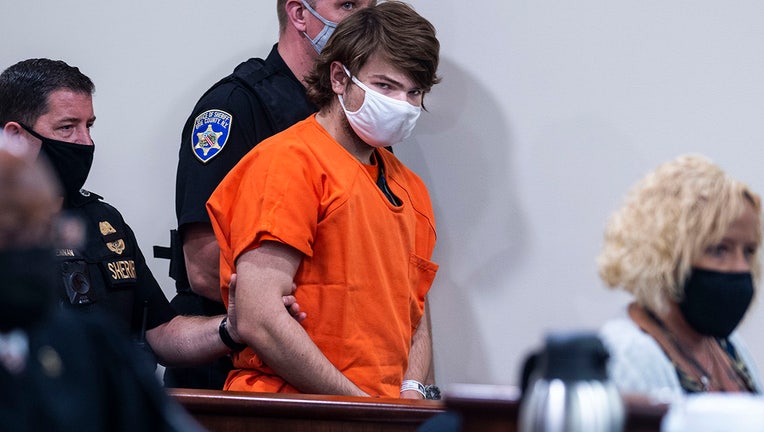 File: Payton Gendron is escorted in for a hearing at Erie County Court on Thursday, May 19, 2022 in Buffalo, NY. (Kent Nishimura / Los Angeles Times via Getty Images)

BUFFALO, N.Y. - The white gunman who attacked shoppers and workers at a supermarket in Buffalo, New York, killing 10 people and wounding three others has pleaded guilty to murder and hate-motivated terrorism charges. Most of the victims were Black.

The charges carry an automatic sentence of life in prison.

Payton Gendron, 19, went into the Tops Friendly Market on May 14th wearing military gear and live-streaming with a helmet camera opened fire.

The supermarket is in a predominantly Black neighborhood.  Police said that Gendron researched the local demographics and arrived a day in advance to conduct reconnaissance with the intent of killing as many Black people as possible.

Among the dead was security guard Aaron Salter — a retired Buffalo police officer — who fired multiple shots at Gendron. A bullet hit the gunman’s armor but had no effect. Gendron then killed Salter, before hunting more victims.

"He’s a true hero," Buffalo Police Commissioner Joseph Gramaglia said. "There could have been more victims if not for his actions."

Another victim was shopper Katherine Massey, whose sister, Barbara Massey, called her "a beautiful soul," and Haywood Patterson, who worked as a driver, giving people rides to and from Tops and helping them with groceries.

77-year-old Pearly Young was also killed while shopping for groceries. "She loved singing, dancing, & being with family," the outlet reported. "Young ran a food pantry in the Central Park neighborhood for 25 years, feeding people every Saturday."

Andre Ellicott was someone who was always there for his family. He was visiting from out of town and had gone to Tops to pick up a cake as a birthday surprise for his grandson, according to his cousin, Clarissa Alston-McCutcheon.

Gendron, who was handcuffed and wore an orange jumpsuit, showed little emotion through the 45-minute proceeding, just occasionally licking and clenching his lips. He answered "yes" and "guilty" as the judge referred to each victim by name and asked whether he killed each victim because of their race.

Immediate relatives of the victims were joined by Buffalo Mayor Byron Brown and the police commissioner in the gallery. Many of the relatives appeared to be crying, dabbing their eyes and sniffling. The judge urged calm as the proceedings began. "I understand this is a momentous and tremendously emotional event," Judge Susan Eagan said.

"Swift justice," is how Erie County District Attorney John Flynn described the result, noting that it's the first time anyone in the state of New York has been found guilty of the hate-motivated terrorism charge.

"This critical step represents a condemnation of the racist ideology that fueled his horrific actions on May 14," said Gendron’s lawyer, Brian Parker. "It is our hope that a final resolution of the state charges will help in some small way to keep the focus on the needs of the victims and the community."

The racially motivated attack came a year after Gendron was taken to a hospital by state police after making threats involving his high school, according to authorities.

New York State Police said troopers were called early in June 2021 to the high school then attended by Gendron for a report that a 17-year-old student had made threatening statements.

Gendron threatened to carry out a shooting at Susquehanna Valley High School, in Conklin, New York, around the time of graduation, a law enforcement official who spoke on condition of anonymity said. The official was not authorized to speak publicly on the investigation.

The supermarket reopened 2 months after the shooting.

The decision to reopen, rather than relocate, the store was met with mixed emotions in the East Buffalo neighborhood that, beset by high poverty, fought for years to get a grocery store. Since opening in 2003, the Tops location remains the only supermarket in the immediate area.