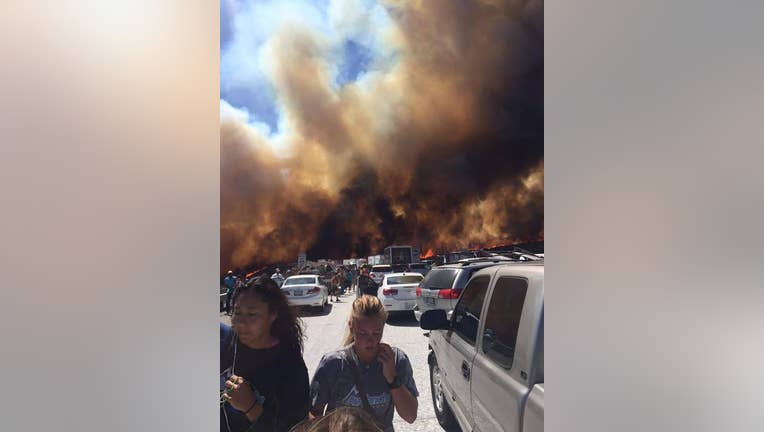 Fire in El Cajon Pass traps motorists on I-15

Fire in El Cajon Pass traps motorists on I-15

Fire traps drivers on I-15 in California

Fire traps drivers on I-15 in California

SAN BERNARDINO, Calif.  -- A dangerous, fast-moving wildfire spread through the Cajon Pass on Friday afternoon, jumping the 15 Freeway, destroying 20 vehicles and damaging 10 others, San Bernardino National Forest said.  There were no injuries.

Talia Sclafani and her soccer teammates were on their way to San Diego when their coach brought their passenger van to a stop on the highway.

They could see smoke in the distance, perhaps a mile away.

But then the smoke -- and the flames -- started to get closer.

"To our left, it was like a spark and then five minutes later the freeway was engulfed," she said.

As the flames neared they jumped I-15.

Police had come by, calling over their loudspeakers for people to stay in their cars.

Sclafani and her teammates ditched their van, left everything and started running up the mountain in the 95 degree heat of the California afternoon.

What seemed like 1,000 people were doing the same, she said.

"Including a pregnant woman we helped out," she said

They stayed up on the hill for about three hours.

"There were lots of people crying. Some were vomiting. People were really frightened," she said.

About 20 cars and trucks in a long line of abandoned vehicles on the freeway tourists use as the main road between Las Vegas and Los Angeles caught fire as flames from a brush fire jumped the highway Friday.

There were no reports of injuries, said Steve Carapia of the California Highway Patrol. He estimated there were up to 70 cars, trucks and tractor-trailers on I-15 northbound near San Bernardino.

Twenty vehicles were destroyed and 10 were damaged, San Bernardino County Fire said on its Twitter feed.

Five homes were burned and about 50 more buildings were threatened, the department said.

"You could see the flames moving from the west side of the I-15 freeway, and basically we just watched it as it literally jumped over the freeway and started the fire on the other side. And it just got worse from there," Ryan McEachron told CNN's "Anderson Cooper 360˚"

He said southbound traffic also had stopped and suddenly a huge group of people came walking up the road.

"At which point everybody on the freeway just started turning their vehicles around," he said.

As the fire headed north toward the town of Phelan, dozens of fire trucks moved into position as homeowners with garden hoses cast eerie silhouettes against the dark smoke.

Several residents were watering down their roofs and trees, knowing the flames could soon be there.

Helicopters streaked through the air, carrying huge buckets of water. Earlier they dumped their loads on burning cars, now they tried to stop the advance of the flames, burning the chaparral on the hillsides.

Video shot from helicopters over the blaze showed several cars and a tractor-trailer on fire. A boat on a trailer was also ablaze. Helicopters dumped water on some of the vehicles.

Several DC-10s also joined the battle against the fire.

For a while, officials were concerned about private drones in the airspace where they wanted to conduct drops.

"Please stop flying hobby drones in the area. We can't risk the choppers colliding with them. We could have loss of life," U.S. Forest Service spokeswoman Gerrelaine Alcordo said.

KTLA reported the fire started about 2:30 p.m. off the freeway just north of State Route 138 (map), prompting the closure of all southbound and northbound lanes of the 15 Freeway soon after. Responding fire crews were stuck in traffic, authorities said.

The North Fire was at 500 acres about 3:45 p.m., and firefighting aircraft were temporarily grounded due to drone activity, the San Bernardino County Fire Department stated on Twitter. Two hours later, the fire was at 3,500 acres.

On the  highway, TV footage showed a helicopter dropping water on the cars to put the fires out. A boat on a trailer burned, also.

Some 20 vehicles were destroyed and 10 were damaged when the fire jumped the southbound lanes of the 15 Freeway. 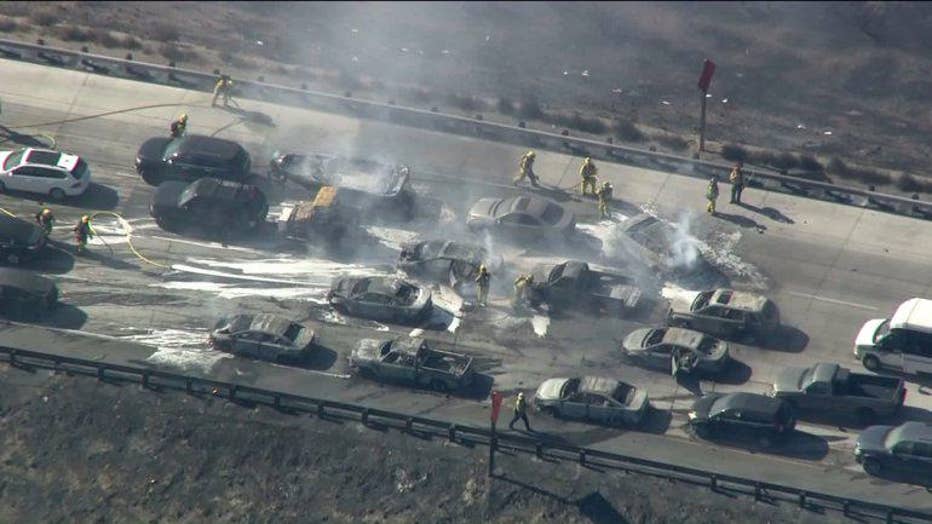 Two of the vehicles destroyed were big rigs, according to the multi-agency federal wildfire website InciWeb. Two more big rigs were damaged.

Aerial video from Sky5 also showed a boat and a car-carrier truck burning.

Seventy to 80 vehicles were left on the pavement, some without keys, California Highway Patrol spokesman Steve Carapia said. The agency was trying to get the vehicles out of the fire’s path, but officers were awaiting tow trucks from the Victorville area, Carapia said.

The blazed, which has been dubbed "North Fire" on social media, was reported at about 2:30 p.m. and had spread to about 50 acres by 3 p.m., the San Bernardino County Fire Department stated. It quickly grew to about 3,000 acres and destroyed at least five homes in the area.

Two lanes on the northbound 15 Freeway had been reopened. There was no indication when the southbound lanes would be cleared.

A drone flying near the San Bernardino blaze forced crews to abandon air drops, which would mark the third time in a matter of weeks that firefighters have been grounded because of the devices, the  Los Angeles Times said.

CNN contributed to this report.