NORTH PORT, Fla. - The only person of interest in Gabby Petito’s case has yet to be found, and now that investigators have found her body, their efforts to track him down have since intensified.

It’s been one week since Brian Laundrie’s parents apparently heard from him, according to North Port police. On Tuesday morning, police announced they were resuming their search in the Carlton Reserve, the 25,000-acre park in Sarasota County, where crews were over the weekend.

The preserve is closed until further notice, according to the non-profit, Friends of Carlton Reserve.

Searchers wrapped up as night fell Tuesday, saying they would resume their search for Laundrie in the morning.

After yesterday’s heavy rains, North Port police say sections of the Carlton Reserve were waist-deep in water in several areas, calling it "unforgiving terrain." The conditions of the park would give someone fewer places to hide, they added.

Survivalist explains how long Laundrie could last in Florida wilderness

Last week, Brian's parents said they believe he was there, authorities said, prompting the extensive search.

On Monday morning, FBI agents executed a search warrant at their home after the preserve search was halted. His parents were escorted out as detectives poured in.

Deputies, police and state wildlife officials returned to Carlton Reserve on Tuesday morning, resuming their search in the 25,000-acre park for Brian Laundrie.

Agents filled several vehicles with cardboard boxes and larger items – all presumed to be evidence related to Petito's disappearance.

A statement from the agency said agents were executing a search warrant at the home "relevant to the Gabrielle ‘Gabby’ Petito investigation." Search warrants explain detectives are looking for a digital trail of evidence that may be stored on electronic devices and external hard drives.

They know the camper van the couple used for the cross-country trip was spotted August 27 near Grand Teton National Park – not far from where her body was found on Sunday. Laundrie was back in North Port with the van five days later.

The search for Brian Laundrie moved from a swampy Sarasota preserve back to the home he shares with his family Monday. FBI agents spent most of the day searching the home, filling police vehicles with evidence, and speaking with his parents.

Detectives are hoping to use whatever data they can recover from electronic devices to build a timeline of Gabby’s whereabouts as well as Brian’s.

The warrant also says Gabby’s mom told detectives she and her daughter had discussed growing tension between her and Brian on the trip. It also says her mom was worried something was wrong after her final text came August 27. In it, Gabby had called her grandpa by his first name, something she says Gabby never did. The text asked her mom to help him because he kept calling her.

Officers resumed their search of the Carlton Reserve for Brian Laundrie, a person of interest in the disappearance of Gabby Petito, whose remains were presumed to have been found in Grand Teton National park. Courtesy North Port Police Department

"Can you help Stan, I just keep getting his voicemails and missed calls," states the search warrant, filed in the Sarasota County Circuit Court on Friday and made public Monday.

According to the document: "The reference to ‘Stan’ was regarding her grandfather, but per the mother, she never calls him ‘Stan.’ The mother was concerned that something was wrong with her daughter."

The text was one of a dozen grounds local law enforcement claimed it had for probable cause to conduct a search warrant at the home of Brian Laundrie, Petito’s fiancé, and his parents in North Port, Florida. 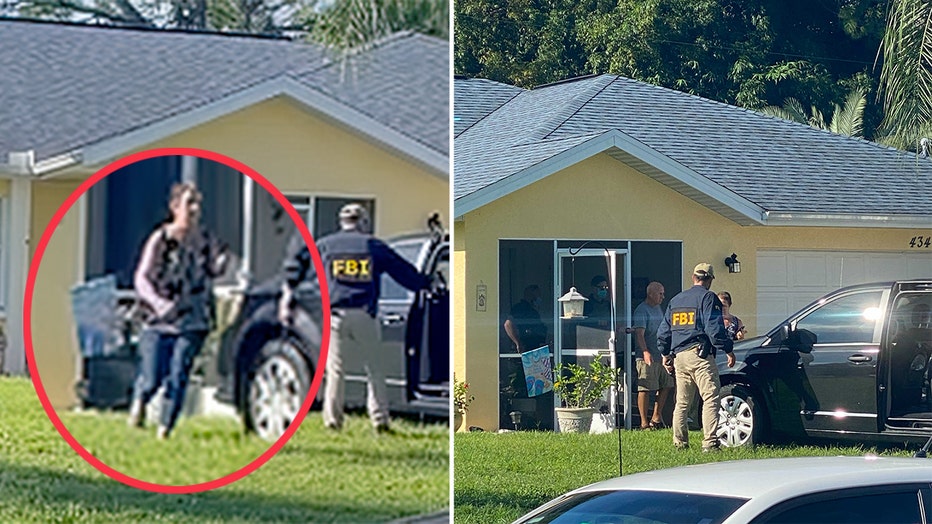 Brian Laundrie's parents were seen outside their North Port home after the FBI arrived to serve a search warrant on September 20, 2021 (Photo from FOX)

Laundrie’s Ford Mustang was also towed from the property on Monday. North Port police say Laundrie’s parents claim he last used the car a week ago to drive to the Carlton Reserve, where they say they later found it and brought it back home. 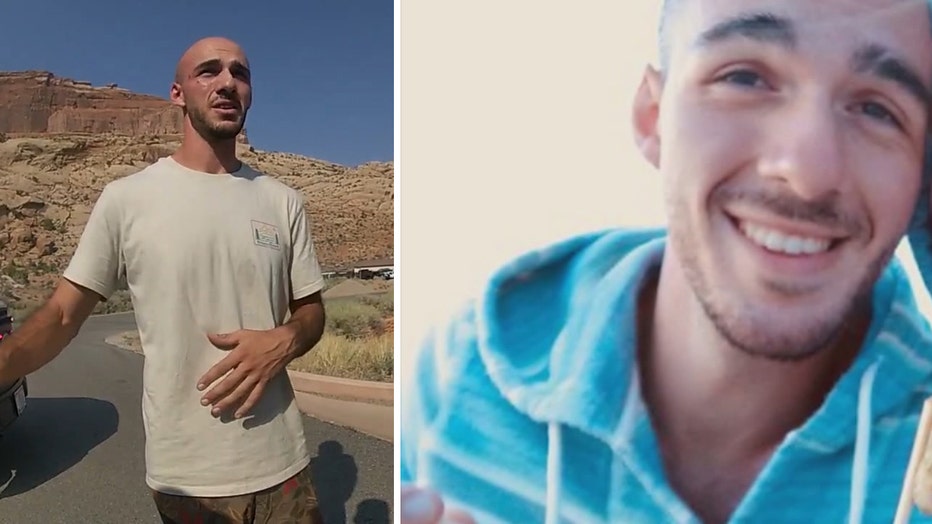 As for Brian, he’s still nowhere to be found. A two-day search of the 25,000-acre wildlife refuge yielded nothing. His lawyer initially scheduled a press conference for Tuesday afternoon out of New York but later said he decided to cancel it after speaking with the FBI.

Deputies in the Florida Panhandle were checking into a Facebook post that showed a person of similar description on a rural trail cam in the community of Baker.

Meanwhile, a coroner confirmed that a body found Sunday in Wyoming was indeed Gabby. Investigators believe Laundrie – Gabby's fiancé – is the last person to see her alive.

Her body was found nearly three weeks after Brian returned home to North Port with the camper van – without Gabby. Brian was later named a person of interest in her disappearance.

The 911 caller who reported a 'domestic dispute' between Brian Laundrie and Gabby Petito in Moab, Utah, on Aug. 12 was heard telling a dispatcher that 'the gentleman was slapping the girl' and hitting her, Fox News has confirmed Monday after exclusively obtaining the audio of the call.

After not speaking with investigators for days, the Laundrie family eventually told investigators Brian had left days earlier with a backpack, heading for the preserve. The family’s attorney said Brian’s parents actually went looking for him on Wednesday and found his car parked at the preserve, but they left it so he could drive home.

However, when he didn’t return Thursday morning, the parents say they went to retrieve the car themselves.

A search warrant released Monday revealed that police had already searched the couple's van and found an external hard drive they plan to search for any clues.

An attorney for the Petito family says Brian is not missing but rather on the run, adding that the Laundrie family’s request to have the North Port police look for their son but not for Gabby is "reprehensible and hypocritical."

The Laundrie family put out a statement Sunday night, saying the news about Gabby is "heartbreaking," adding that they’re praying for her and her family. Their attorney told FOX News on Monday that he had no immediate comment on the FBI search.

Investigators are still asking the public for help in locating Brian Laundrie. They say he is a white male, 5-foot-8 and weighing 160 pounds. He has brown eyes, very short brown hair, trimmed facial hair, and was last seen wearing a hiking bag with a waist strap.

Anyone with information is asked to call 1-800-CALL-FBI.