USS Nimitz back in Washington

This has been the longest deployment since the Vietnam War

BREMERTON, Wash. - Sailors aboard the aircraft carrier USS Nimitz, based out of Bremerton, returned to Washington on Thursday after nearly 11 months deployed in U.S. 3rd, 5th, and 7th Fleets.

The Nimitz was the first carrier to embark on a deployment for the U.S. Navy after the onset of the pandemic.

The crew walked aboard Nimitz on April 1, 2020, at the Naval Base Kitsap for what would be a 27-day restriction of movement period. Nimitz deployed from San Diego June 8 after completing integrated training with other assets from the Nimitz Carrier Strike Group.

This is the longest period of time the Nimitz has been deployed since the Vietnam War.

"It has been a long 11 months since we bid farewell to our homeport in the beautiful Pacific Northwest, and it feels great to be back," said Capt. Max Clark, Nimitz commanding officer, and Philadelphia native. "I am so proud of the Sailors on board Nimitz. The hard work, dedication, and teamwork they demonstrated day in and day out to accomplish all missions assigned is commendable."

In January, the aircraft carrier was ordered home from the Persian Gulf area, then sent back.

The highly unusual Nimitz flip-flop by the acting secretary of defense at the time, Christopher Miller, seemed to undercut U.S. Central Command’s efforts to convince Iran that it would not pay to launch an attack on U.S. forces.

The huge vessel, with a complement of attack and support aircraft, was leaving the region when it received word to turn around and head back. 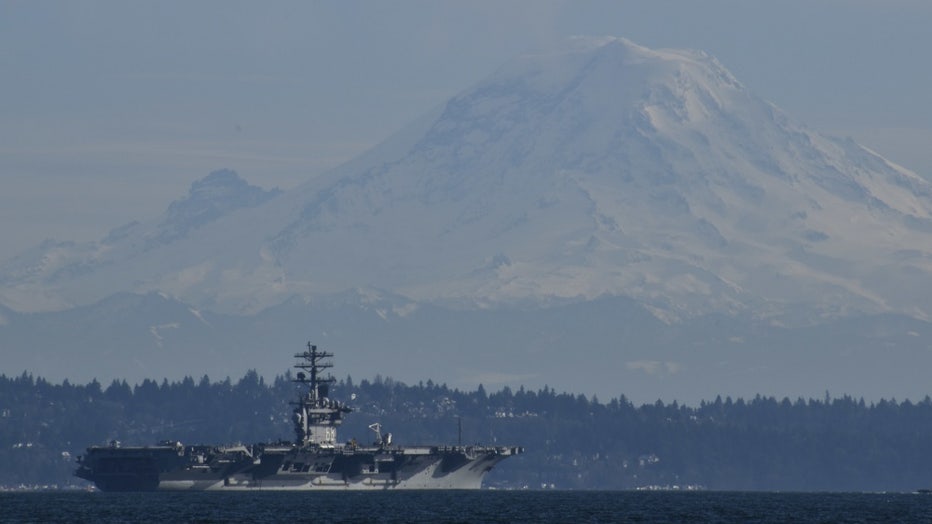 Sending the Nimitz home had been on the table for weeks, since the carrier was on a lengthy deployment and was scheduled to be home by the end of 2020. Its tour was extended by a few weeks to provide backup for U.S. troop withdrawals in Afghanistan, Iraq and Somalia. But as tensions with Iran rose in mid-December, Central Command wanted to keep the Nimitz nearby. Instead, on Dec. 31, Miller announced that he had ordered it to return home. Three days later, he reversed himself and said it would stay.

Canceling the go-home order for the Nimitz took some defense officials by surprise, suggesting that the decision may have been made at the White House rather than as a result of new arguments from military officers.

The move means that there will be no US carrier operating in the Central Command area, according to the Pentagon. But Kirby said the US continues to have "a robust presence in the Middle East" and has more than enough airpower if necessary.

The Nimitz and supporting ships have been deployed for 10 months which is longer than typically required, they said.