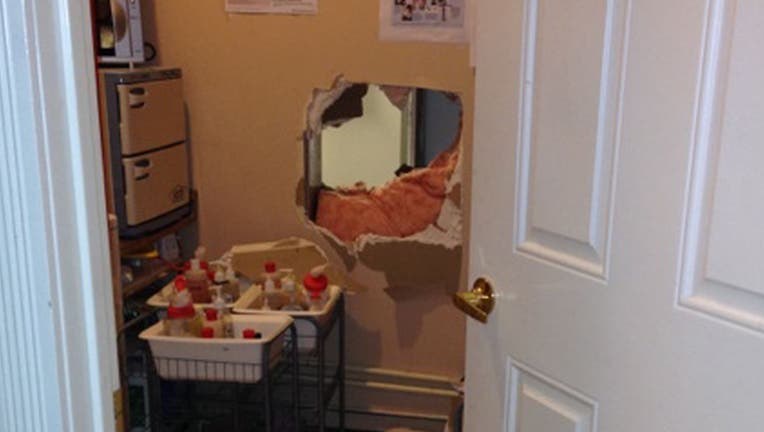 A determined crook kicked through this wall to get into another business to rob in Mount Vernon strip mall. (Photo: Mount Vernon Police Dept.)

MOUNT VERNON, Wash. -- A brazen burglar spent hours inside a strip mall, and surveillance cameras caught him in the act. But it’s how he got inside that has business owners shaking their heads.

Police say the crook pried open a lock on the back door of a vacant business, but then kicked through the walls to get inside the other two stores.

“I think he was determined and I think by the sophistication of what he’s done it’s probably not the first,” said Lt. Chris Cammock with the Mount Vernon Police Department.

It happened early Wednesday morning at a strip mall on East College Way.

Surveillance cameras caught the guy on video. Police say the damage he caused during his crime spree costs much more than the money he got out of the registers.

Police say another burglary last weekend at Brim Tractor Co. on Cedardale Road might be connected -- but they aren’t certain.

Crooks mangled the dead-bolt and got away with 13 chainsaws and four weed-whackers worth more than $10,000.

The repairs will cost more than $4,000 to patch the holes inside the strip mall.

Cops are hoping the public will tip them off as to who might be responsible for either burglary.