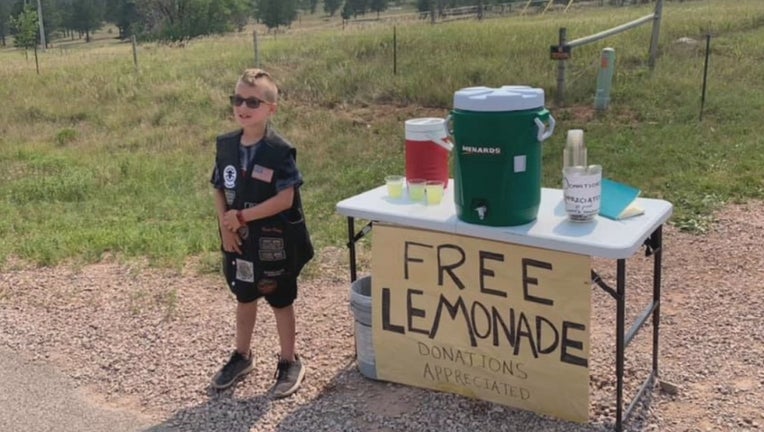 Wyatt and his lemonade stand have become a hit for bikers at Sturgis. (Wyatt's Lemonade Stand)

STURGIS, SD (FOX 9) - This weekend, hundreds of thousands of motorcyclists are descending on the Black Hills for the annual Sturgis Motorcycle Rally. For many of them, an 8-year-old's lemonade stand has become a popular stop to quench their thirst.

Wyatt Dennis has loved motorcycles all his life. For the last few days, the 8 year old has seen a steady stream of them at his lemonade stand just outside Sturgis.

This weekend, hundreds of thousands of motorcyclists are descending on the Black Hills for the annual Sturgis Motorcycle Rally. For many of them, an 8-year-old's lemonade stand has become a popular stop to quench their thirst.

"Feeling good," said Wyatt. "Yesterday we got a huge flag to put up so that's really kind of helping."

Wyatt started the free lemonade stand last year as way to raise some money to buy a Lego set. But on the first day, he not only made enough cash to get his toys, he was able to donate $200 to St. Jude Children's Hospital.

This year, Wyatt's lemonade stand went viral after someone staying at the campground next door posted about it on social media.

"I'm still trying to figure out exactly what happened," said his mother Robin Dennis. "This just blows my mind."

So far, the post has been shared more than 60,000 times and encouraged hundreds of bikers from all over the U.S. to stop by on their way to the Sturgis motorcycle rally.

"He loves it," said Robin. "He loves seeing the people. He loves waving to the people. Even if they don't stop, they ride by and honk their horn."

Whether he's serving lemonade, posing for pictures, or sitting on a motorcycle, Wyatt has become something of a local celebrity. He's raised enough to donate $4,500 to St. Jude this year and he has no plans to pump the brakes anytime soon.

"As long as he's having fun doing it and it's what he wants to do, we'll be out here every year serving lemonade to everyone who's here," his mother said.