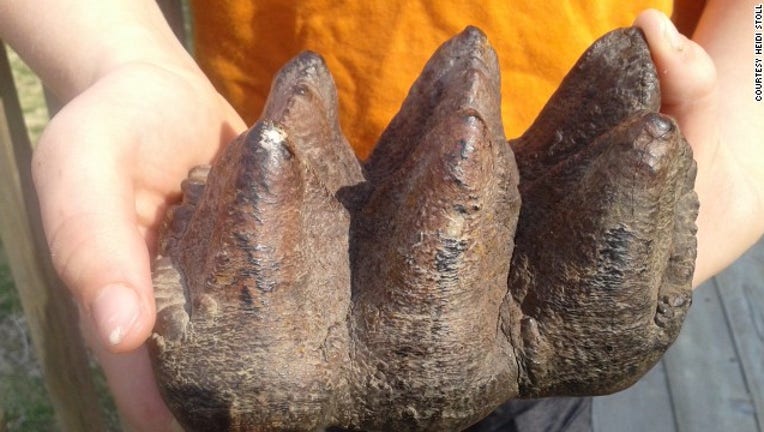 A boy from Michigan finds a mastodon tooth while playing outside that dates back thousands of years. From CNN.

DETROIT -- Mastodons -- elephant-like beasts that lumbered across North America more than 10,000 years ago -- are long extinct, but apparently it wasn't tooth decay that did them in.

A 9-year-old Michigan boy stumbled across something -- literally -- that, it turns out, is a mastodon tooth.

"I was walking down at the creek last summer. I felt something that I stepped on so I picked it up and everybody in the neighborhood thought it was pretty cool," Philip Stoll told CNN on Friday.

Affectionately called "Huckleberry Phil" in his neighborhood near Lansing because of his penchant for exploring outside, Philip took the lump home and washed it off in the kitchen sink, and checked to see if it was magnetic, his mother, Heidi Stoll said. It wasn't.

The peculiar object was about 8 inches in length, brown, and had six peaks.

"I was holding it in my hands for a few minutes and then it gave me the creeps so I put it down on the desk," Heidi Stoll told CNN. "It looked like a tooth. It looked like there was something like gum tissue, a little bulgy thing around the top."

After researching "large tooth object" on the Internet, mother and son reached out to James Harding, a herpetologist -- an expert on reptiles and amphibians -- at nearby Michigan State, who told them it was the tooth of one of the long-gone beasts that roamed the area millennia ago.

"This is indeed a mastodon tooth," Professor Harding confirmed in an e-mail. "Apparently (it is) the upper surface, broken off at the roots."

Philip told CNN that he always thought he might want to be a paleontologist -- a scientist who studies prehistoric life -- but now feels that more than ever. And with summer approaching, there's more exploring to be done.

"It's going to be hard to get him run around with shoes on or come inside to do his schoolwork," Stoll said of her son.