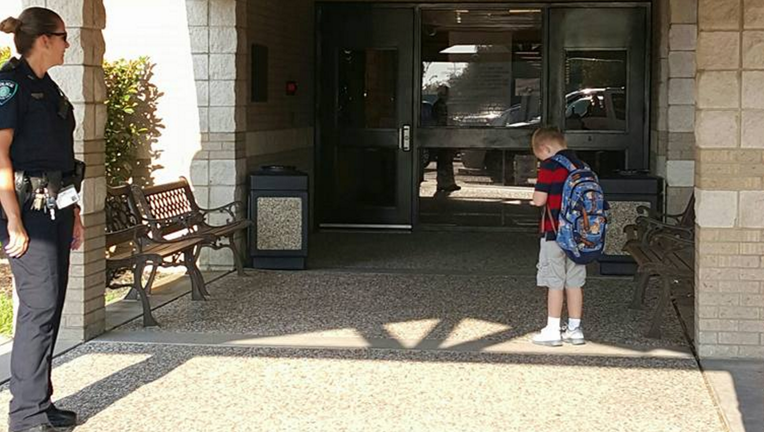 A Texas mother was baffled at first when her son, who was running late for school, stopped in his tracks. (Courtesy: Heather Nelson)

SANTA FE, Texas – A Texas mother couldn't understand why her 5-year-old son wasn't entering the school building – but when she found out, she took a picture that is now going viral.

Heather Nelson says her son Royce was running late for kindergarten when he suddenly stopped and bowed his head, several feet in front of the main doors.

"I was about four cars back so I just saw him standing there with what looked like him just looking at his shoes," Nelson remembered. "But that did not seem like Royce."

Nelson says she found out what he was doing when the officer outside the school told her "Mom, he's doing good, he stopped for the Pledge of Allegiance," putting a hand over her heart to demonstrate.

"Since they do not have prayer in schools he says a little prayer silently and that's exactly what he was doing," Nelson wrote. "I was so proud that he stopped when the Pledge of Allegiance came (on) and stood his ground and did not move as the other kids were going in."

Nelson admits she was a little surprised that her son stopped like he did as the other kids rushed past him.

"When I picked him up I asked him what made him do it," Nelson said. In a matter-of-fact, "Duh, mom" voice, Royce told her, "That's what you're supposed to do."

She says she checked later with the officer to make sure she didn't suggest it to him, "but it was all him and I am so proud of him," Nelson said.