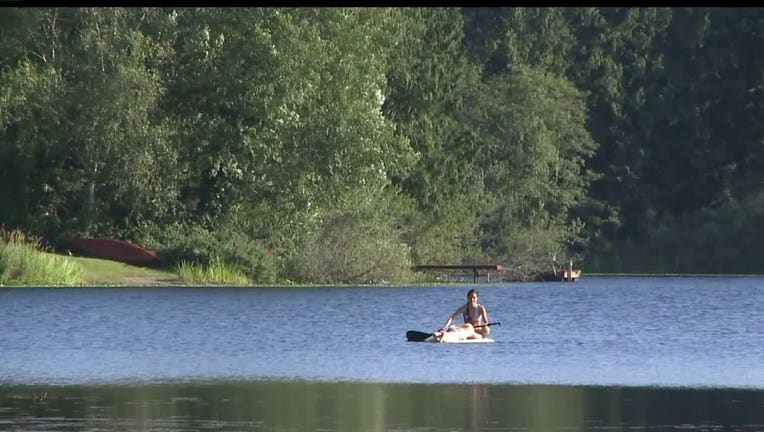 A group of teens who found him administered CPR before he was rushed to the Tacoma hospital in critical condition.

Noah Elkington and his friends were swimming at Island Lake Park Monday afternoon, when one of them saw something floating under the dock. At first, they thought it was a mannequin.

“But then I jumped in there and saw the way his arms were positioned,” the 14-year-old said. “They were straight up, and I knew that wasn't a mannequin.”

It was a 12-year-old boy. He wasn’t moving, so Elkington dragged him to shore where his other friends were.

“Just seeing the boy's face,” said Kiki Mitchell. “I didn't know if he was going to make it.”

“He was in bad condition,” added Dylan Leer. “He was very pale, his lips were blue, and it was not a good sight.”

Leer had taken a CPR certification class at school. So he started doing chest compressions, while someone called 911.

“I was a little freaked out. But it happened so fast, just immediately, instinct, I guess from what I’ve learned.”

Mitchell had also had some training, but she said that didn’t really prepare her for the emotions of seeing someone close to death.

“When we did our CPR training, they didn't really mention the stuff that would come up, it was completely different being there and seeing it.”

The teens didn’t know the boy or how he ended up under the dock. They think he had been fishing with his grandfather.

“He was a boy that we had talked to earlier,” said Elkington. “He was in the water. But when we saw him, he was only ankle deep.”

They’re glad they noticed him and were able to help.

Now they want other teens to know that they can make a difference too, by learning CPR.

“I’m so grateful for having the training,” said Mitchell. “When I was at the training, I was thinking this isn't something I’m going to use.”

“It’s probably pretty important,” added Leer. “If your school offers it or a class that offers, I’d take it. Because you'll never know when you're going to use it.”