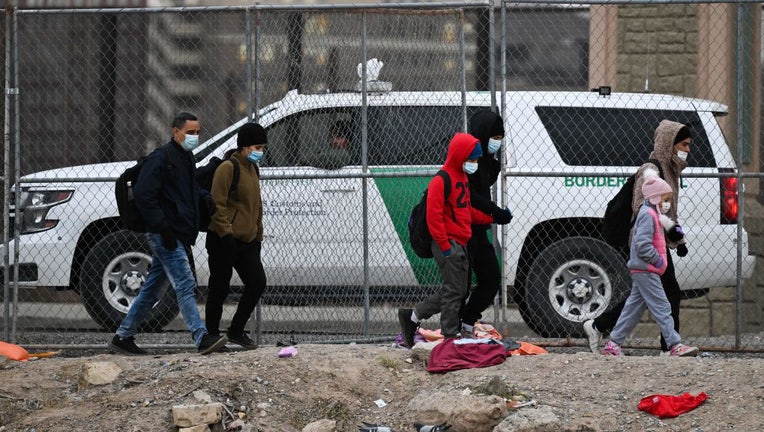 A Border Patrol agent directs migrants as they walk around a border wall fence after they walked across the Rio Grande river into El Paso, Texas, on December 18, 2022. (PATRICK T. FALLON/AFP via Getty Images)

EL PASO, Texas - Suspense mounted at the U.S. border with Mexico on Tuesday about the future of restrictions on asylum-seekers as the Supreme Court issued a temporary order to keep pandemic-era limits on migrants in place.

Conservative-leaning states won a reprieve — though it could be brief — as they push to maintain a measure that allows officials to expel many but not all asylum-seekers. In a last-ditch written appeal to the Supreme Court, they argued that an increased numbers of migrants would take a toll on public services such as law enforcement and health care and warned of an "unprecedented calamity" at the southern border.

The Department of Homeland Security, which is responsible for enforcing border security, acknowledged Roberts' order — and also said the agency would continue "preparations to manage the border in a safe, orderly, and humane way when the Title 42 public health order lifts."

Migrants have been denied rights to seek asylum under U.S. and international law 2.5 million times since March 2020 on grounds of preventing the spread of COVID-19 under a public-health rule called Title 42.

The decision on what comes next is going down to the wire, as pressure builds in communities along both sides of the southwestern U.S. border.

In El Paso, Democratic Mayor Oscar Leeser warned Monday that shelters across the border in Ciudad Juárez are packed to capacity with an estimated 20,000 migrants who are prepared to cross into the U.S.

Despite the court stay Monday, the City of El Paso rushed to expand its ability to accommodate more migrants by converting large buildings into shelters, as the Red Cross brings in 10,000 cots.

Local officials also say they hope to relieve pressure on local shelters by chartering buses to other large cities in Texas or nearby states, bringing migrants a step closer to relatives and sponsors in coordination with nonprofit groups.

"We will continue to be prepared for whatever is coming through," Leeser said.

At a church-affiliated shelter a few blocks from the border, migrants including women and children lined up in the early afternoon Monday in hopes of securing a bed for the night, accepting donations of food from a succession of cars bearing gifts. Police and municipal garbage workers arrived to removed abandoned blankets and discarded possessions.

Jose Natera, a 48-year-old handyman from the Venezuelan town of Guaicaipuro, said he traveled for three months to reach El Paso, sometimes on foot, with no money or sponsors to take him further.

"I have to stop here until I can get a ticket" out, he said.

"I have to do it," said Lujan, a 39-year-old construction worker. "I have kids and I know the struggle."

Conservative-leaning states have argued that lifting Title 42 will lead to a surge of migrants into their states and take a toll on government services like health care or law enforcement. They also charge that the federal government has no plan to deal with an increase in migrants — while in Washington, Republicans are set to take control of the House and make immigration a key issue.

Biden administration officials said they have marshaled more resources to the southern border in preparation for the end of Title 42. That includes more border patrol processing coordinators, more surveillance and increased security at ports of entry.

About 23,000 agents are currently deployed to the southern border, according to the White House.

Immigration advocates have said that the Title 42 restrictions, imposed under provisions of a 1944 health law, go against American and international obligations to people fleeing to the U.S. to escape persecution — and that the pretext is outdated as coronavirus treatments improve. They sued to end the use of Title 42; a federal judge in November sided with them and set the December 21 deadline.

Catholic bishop of El Paso, Mark Seitz, expressed concern Monday that the stay would keep migrants who have no choice but to flee their home from even making the case for protection in the U.S., after years of pent-up need.

"What happens now with all those on their way?" he said.

Title 42 restrictions have applied to all nationalities but have fallen disproportionately on those from countries that Mexico has agreed to take back: Guatemala, Honduras, El Salvador and, more recently Venezuela, in addition to Mexico.