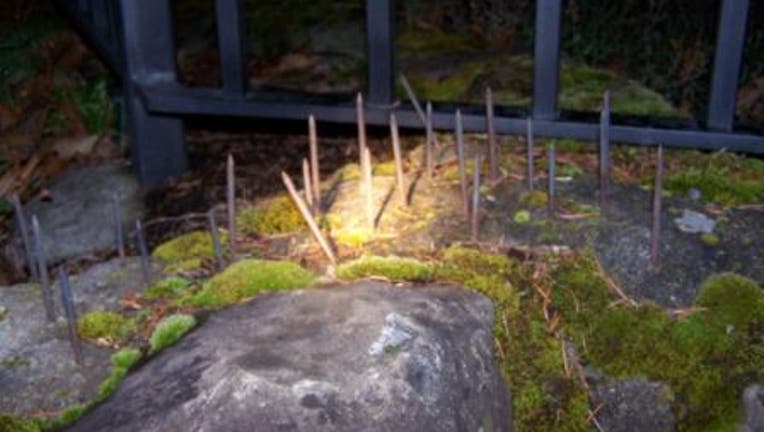 Picture of the booby trap from KPTV.

GLADSTONE, OR (KPTV) -- A Clackamas County sheriff's deputy is recovering after stepping on nails while responding to a domestic disturbance.

Two deputies responded to a home on Southeast Addie Street in the Gladstone area Monday night after getting reports of a domestic disturbance.

When they arrived, they found the home surrounded by a wrought iron fence and the gate closed.

One of the deputies stepped over a low point on the fence, but then stepped onto some nails that had been sunk into concrete to stop people from stepping over the fence.

The deputy's foot was pierced by two of the nails.

He was taken to Willamette Falls Hospital where he we treated and released.

Deputies said no crime was committed as a result of the domestic disturbance. At this point, no one has been charged with a crime for the trap.

The sheriff's office is investigating but says charges are unlikely.

Deputies say homeowners have a right to protect their property, but they should be careful as traps like the nails could open them up to possible civil litigation when an innocent person is injured as a result of the trap.