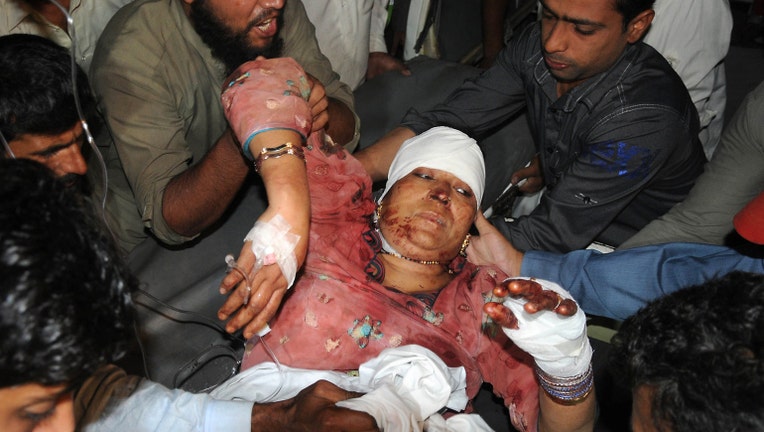 Pakistani men carry a wounded woman at a hospital in Lahore after a suicide bomb attack near the Wagah border gate on November 2, 2014. A suicide bomber killed at least 55 people at the main Pakistan-India border crossing, the blast tearing through c


(CNN) -- At least 45 people were killed and 55 more injured in a Lahore, Pakistan, suicide blast near the country's border with India, police and hospital officials said Sunday.

A suicide bomber detonated his vest after a daily parade at the Wagah border crossing, Inspector General Mushtaq Ahmad Sukhera of the Punjab police said. It appeared the bomber entered the parade area as people were leaving and set off an explosive vest near a checkpoint, he said.

Spokesmen for two groups linked to the Pakistani Taliban -- Jundallah and Jamaat-ul-Ahrar -- separately claimed responsibility for the bombing, with the spokesman for the latter, Ehsanullah Ehsan, calling the Jundallah claim "baseless." Ehsan's statement promised more attacks.

Footage from CNN affiliate GEO News showed authorities scrambling through the streets, some of them ferrying the injured on stretchers to ambulances. Many onlookers were crying as they spoke to reporters.

Police have cordoned off the area and are investigating, Sukhera said.

Sukhera and a doctor in the emergency ward at Ghurki Trust Teaching Hospital said the death toll was 45 people, according to the latest count.

The death toll has risen rapidly since the explosion was first reported.

More than 5 kilograms (11 pounds) of explosives were used in the blast, which was conducted by a male from 18 and 20 years old, the inspector general said.

Some of the bomber's body parts were found at the scene, he said.

Indian Prime Minister Narendra Modi sent his condolences to the families of the deceased, he tweeted shortly after condemning "the dastardly act of terrorism."

Authorities were aware of threats of terrorism, and Pakistan's paramilitary security force, the Rangers, was prepared, but the crowds at the border were larger than normal so Rangers weren't able to check everyone as they departed the area, Sukhera said.

Every evening for 55 years at the Wagah border crossing between Lahore and Amritsar, India, Pakistan's Rangers and India's Border Security Force take part in a lowering-of-the-flags ceremony before sunset.

The ceremony, which ends with soldiers folding their countries' flags and shaking hands, draws attendees from both sides of the border, as well as international tourists.

The "beating retreat" ceremony, as it's known, is postponed until Thursday, officials said.