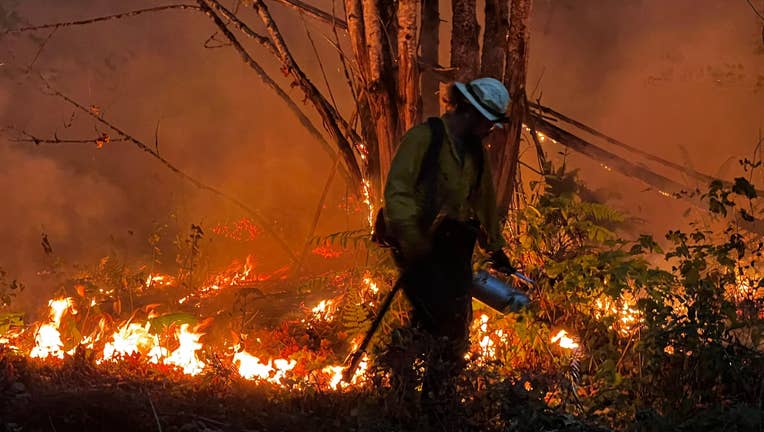 SKYKOMISH, Wash. - A portion of US Highway 2 is back open following off-and-on work on the Bolt Creek Fire near Skykomish.

The Washington State Department of Transportation announced a closure for US 2 between milepost 49 to 50 around 2 p.m. The road was re-opened after a flurry of fire activity was wrapped up around 9:00 p.m.

On Monday, WSDOT officials said US 2 would close at 10:30 a.m. for tree removal and to allow fire crews access. The road was reopened around noon.

"It's devastating," said James Lorkowski, who drove a stretch of US 2 and witnessed fire crews working.

"On the side of the road coming up there was a bunch of branches smoldering," he said. "A lot of smoke right on the road."

FOX 13 caught up with a group of firefighters that were battling flames in the open section of US 2 on Sunday afternoon. They dumped roughly 3,000 gallons of water onto a hot spot, knocking back flames that were a few feet from the road.

Fire crews said there was even more activity in the area that was shutdown Sunday afternoon.

Several stretches of US 2 have closed and reopened as crews fight the wildfire in the area.

All evacuation orders are lifted in King and Snohomish counties for those near the Bolt Creek Fire.

Emergency management officials recently said that all evacuations had been lifted in the area.

The Bolt Creek Fire is more than 12,070 acres in size and officials say it was human-caused.

Hot and dry conditions have contributed to the fire and smoke spreading. Officials said the fire was at 28% containment as of Oct. 2.