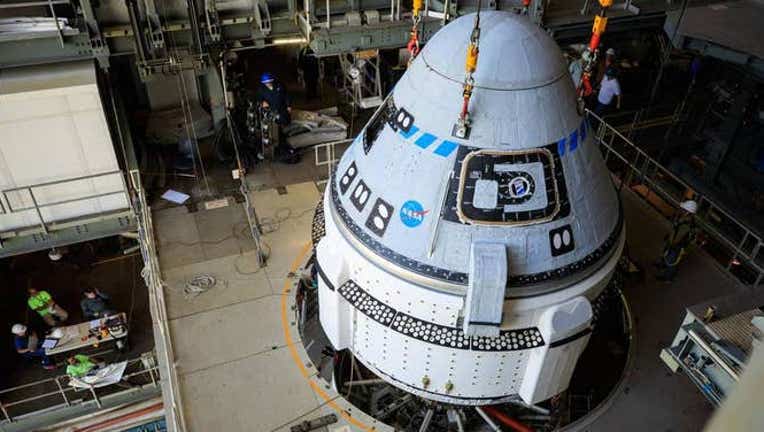 The Boeing CST-100 Starliner spacecraft is lifted at the Vertical Integration Facility at Space Launch Complex-41 at Cape Canaveral Space Force Station in Florida on May 4, 2022, ahead of its second Orbital Flight Test (OFT-2) to the International Sp

On Wednesday, teams rolled the 172-foot-tall ULA Atlas V rocket and Starliner from the hangar to the launchpad, Space Launch Complex-41, at Cape Canaveral Space Force Station. After the 1,800-foot journey, the vehicle will be prepped for lift-off and begin fueling.

The rocket is scheduled to lift off Thursday at 6:54 p.m. ET, sending the Starliner on its journey to the space station.

No one will be on board this flight, but the Orbital Flight Test-2 is the final step before a test flight with astronauts later this year. The spacecraft's commander seat will have a manikin named "Rosie the Rocketeer." Her seat will be outfitted with sensors to collect data and better understand what human astronauts will experience.

NASA astronaut Butch Wilmore said the astronauts who have been training to fly on Starliner are jealous of the manikin that gets to take the trip.

"But obviously, this is part of the evolution of test," Fincke said. "We need to go up, fly the spacecraft without humans on it, demonstrate the automated systems and come back safely … we're thrilled for this because the next one is us."

More than 24 hours ahead of the launch, forecasters with the Space Force 45th Weather Squadron predict a 70% chance of favorable weather for liftoff.

An isolated shower and cloud cover can't be ruled out for launch day as Florida's rainy season is underway. Those isolated showers are expected to develop near or west of the launch site during the countdown, according to the 4th Weather Squadron forecast. The primary concerns for the instant launch window will include the Cumulus Cloud and the Anvil Cloud Rules.

If the launch delays to Friday's backup window, weather conditions will deteriorate as winds push moisture up from the Caribbean increasing rain and cloud cover concerns.

Starliner will dock at the ISS around 7 p.m. Friday or 24 hours after launch if all goes well.

This will be Boeing's third attempt to complete the orbital flight test since 2019.

In 2014, NASA selected SpaceX and Boeing to develop spacecraft to shuttle astronauts to and from the ISS under the agency's Commercial Crew Program. 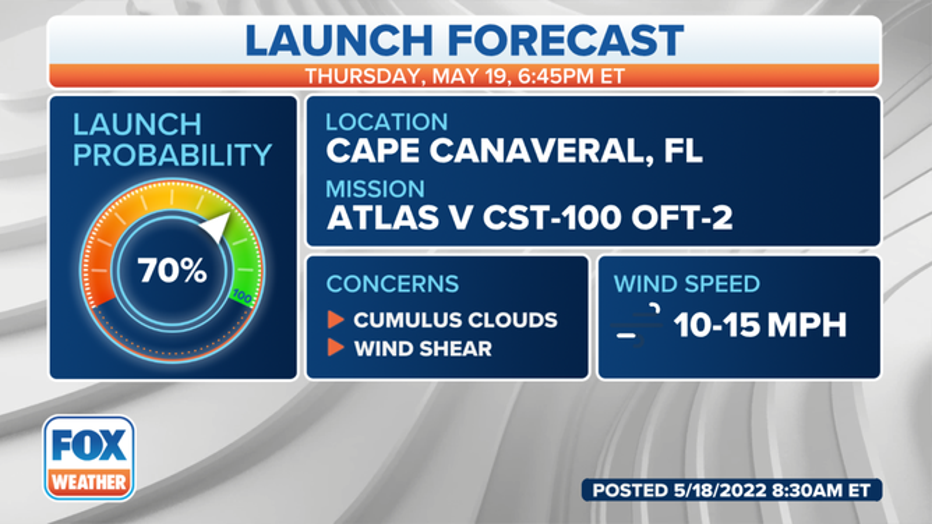 Boeing's first attempt to complete the OFT in 2019 ended 48 hours after launch due to a computer glitch.

Another try in August 2021 was called off before launching when engineers discovered that valves on the spacecraft were sticking due to an issue caused by humidity and fuel. Last week, a report by Reuters revealed Boeing and the manufacturer of the valves, Aerojet Rocketdyne, are in dispute over the issue.

Despite the missteps, NASA managers and astronauts are confident in the spacecraft and say it's essential to have a second human-rated spacecraft.

The final crew assignment for Starliner's first human spaceflight is to be determined. Wilmore, along with NASA Astronauts Suni Williams and Mike Fincke, have all been training to fly on Starliner. Astronauts Nicole Mann and Josh Cassada were assigned to fly on Starliner, but after delays will now fly on SpaceX's fifth mission for NASA, Crew-5.

Williams said the astronaut corps are chomping at the bit to have another spacecraft to fly.

"One of the things that Rosie doesn't do, she doesn't breathe, and so we'll be the first ones when we get in to be the breathers, the creators of carbon dioxide," Williams said.