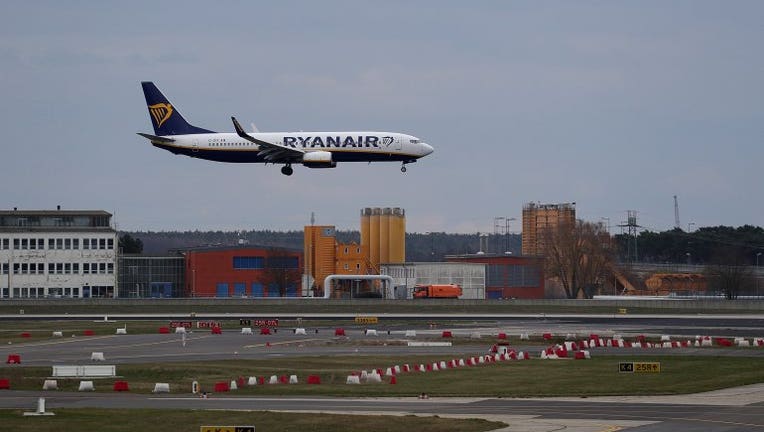 Ryanair is taking the knife to its operations in Europe as it prepares for two years of disruption caused by Boeing's 737 Max debacle. (Photo credit: Krisztian Bocsi/Getty Images)

LONDON -- Europe's biggest airline, budget carrier Ryanair, will cut flights and close some of its bases beginning this winter because of the delay to deliveries of the Boeing 737 Max plane, which has been grounded globally after two fatal crashes.

The airline also warned Tuesday that its growth in European summer traffic for 2020 will be lower than expected because of the slowed deliveries.

Ryanair chief Michael O'Leary said the airline "remains committed" to the Boeing 737 Max and expects it to be back in service before the end of the year but that the date is uncertain.

Ryanair, which is Europe's top airline by passengers, says some delays are expected and doubts about when the plane can return to the skies means it will take delivery of only 30 Max jets a year from now, rather than the previously scheduled 58.

He says the airline will close some of its bases as a result with a hope to return to "normal" growth levels in 2021. No details about the planned base cuts were provided.

Analysts at market research firm FXPro note that while Europe's economy is slowing, there is no lack of demand for flying, so Ryanair's decision could cause flight tickets to rise somewhat.

Boeing's 737 Max has been grounded after the Lion Air crash off the coast of Indonesia in October and the Ethiopian Airlines crash in March that killed a total of 346 people.

Preliminary reports indicate that flight-control software called MCAS pushed the nose of the plane down in both crashes. Chicago-based Boeing did not tell pilots about MCAS until after the first crash. The company is working on changes to make the software more reliable and easier to control.

Concerns about viability of the new aircraft remains, however.

The U.S. Federal Aviation Administration is due to review Boeing's fixes and has said it is following a thorough process, but has no timetable for when the recertification will be completed. European regulators have to then also approve the jets before they can be used in the region.

American Airlines said this week that it will keep the Boeing 737 Max plane off its schedule until Nov. 3, which is two months longer than it had planned. That will result in the cancellation of about 115 flights per day.

United Airlines has also extended its cancellations until Nov. 3. The company has 14 Max jets while American has 24 of them. Southwest Airlines, which has 34 Max jets — more than any other carrier — is canceling about 150 flights per day.