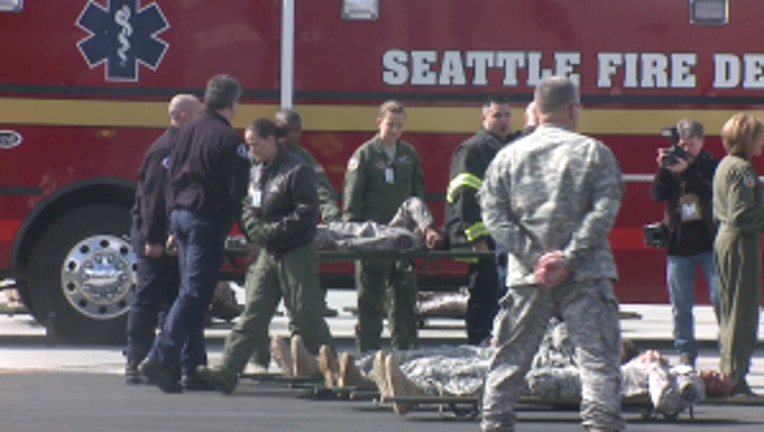 SEATTLE – Officials want to be able to use Boeing Field as a staging area for patients wounded in out-of-state disasters.

In a joint exercise on Tuesday, first responders held a mock drill designed to test their ability to treat and transport patients medically evacuated from neighboring states.

About 40 soldiers played the role of patients, injured in a devastating earthquake in Anchorage, Alaska, and flown to Boeing Field to seek emergency medical care.

Though there was no actual earthquake, or planes and helicopters loaded with the wounded, more than 100 first responders from Madigan Army Medical Center, Seattle Fire Department and others, stood at the ready.

Ambulances waited nearby, ready to “transport” the soldiers to local hospitals. Medical staff directed traffic on the tarmac, pretending to triage those who needed immediate attention.

“We are testing to certify Boeing Field/King County Airport as a patient reception area to received Medevac casualties from a mass casualty area outside this region,” said Col. Homas.

Tuesday’s exercise was the first of its kind for Boeing Field and the region.

The drill is part of the National Disaster Medical System, activated by the government in the event of a mass casualty incident where patients need to be evacuated to nearby states in order to lessen the load on medical centers and hospitals located near a disaster area.