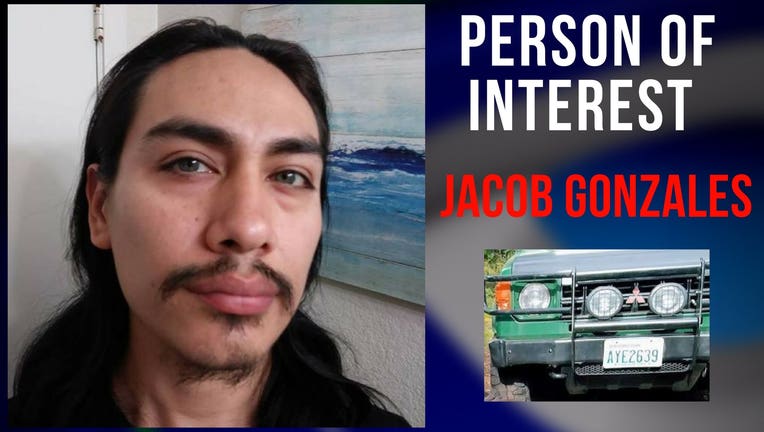 The green 1990 Mitsubishi Montero, Washington license AYE2639, has been located and no longer belongs to Jacob Gonzales.  Based on information coming in from various tips it appears that Gonzales may be driving a silver compact car with an unknown license plate.  We will release more details about the vehicle when they become available.

CAMANO ISLAND, Wash.  — A Washington State sheriff says the body of a woman found near a gun- and ammo-filled bunker last weekend had been decapitated, and a man wanted in the case is on the loose and possibly headed for southern or central California.

The Island County coroner identified the victim as 26-year-old Katherine Cunningham. Detectives found her body Saturday on an undeveloped parcel of land on Camano Island, north of Seattle.

Nearby, investigators discovered a bunker dug into a hillside containing supplies, guns and ammo.

"Based on the evidence it appears that the victim was specifically targeted and this was not a random act," the sheriff's office said in a release.

Island County Sheriff Mark Brown on Wednesday said police are looking for 34-year-old Jacob Gonzales, whom he called a person of interest. Gonzales is described as Hispanic, 5-foot-9 and 150 pounds, with black hair and hazel eyes. He is believed to be driving a green 1990 Mitsubishi Montero, with Washington license plate AYE2639.

He is believed to be armed.

Anyone who wishes to provide information regarding the case should contact Detective Ed Wallace via the ICOM dispatch center at 360-679-9567 or tips@co.island.wa.us.