RICHMOND, Va. -- The director of an animal control office in Virginia experienced a Thanksgiving "miracle" after rescuing a bobcat trapped in the grill of a car Thursday morning.

Richmond Animal Care and Control (RACC) Director Christie Peters told WTVR that a woman driving to work that morning knew that she had hit something in Gloucester County. However, it was not until she parked in Richmond that she discovered a bobcat lodged in the grill of her Prius that had survived the 50-mile, nearly hour-long journey to the city. 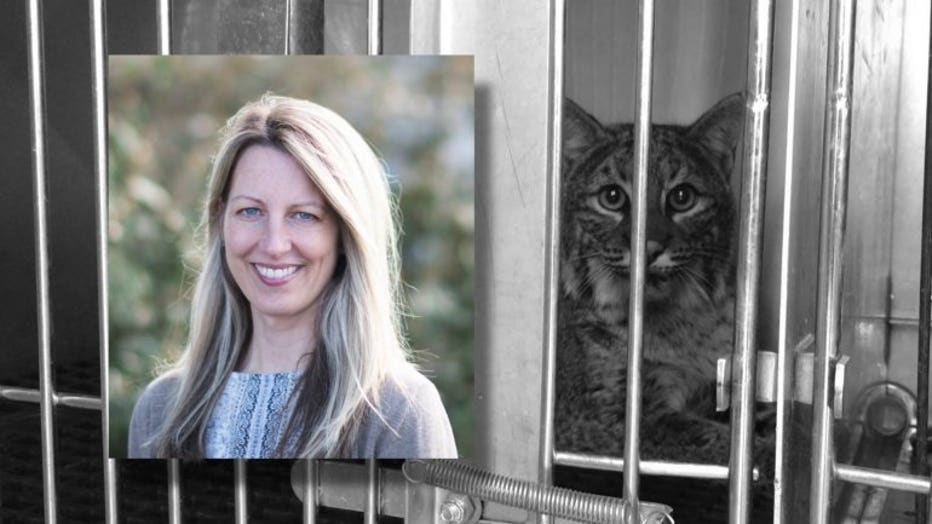 RACC Director Christie Peters, her father and RACC Officer Barbara Jones saved a bobcat from the grill of a Prius on Thanksgiving morning.

Peters said she had been up since 6:30 a.m. baking her husband's favorite chocolate pie in preparation for hosting Thanksgiving when she got a text message from RACC Officer Barbara Jones.

Peters said the text contained the "crazy eyes" emoji along with the question, “What do I do?” 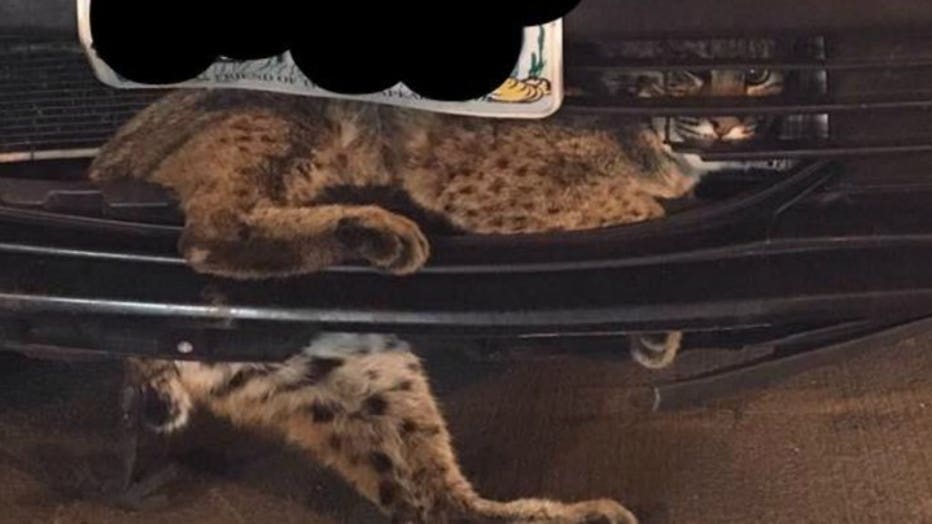 Bobcat waiting to be freed from Prius grill.

“We’ve never done anything like this,” Peters explained. "I didn’t want to make anybody else get out of bed on Thanksgiving morning, so I went with my dad.”

Peters said she changed out of her pajamas, grabbed a coat and then went to pick up supplies from the shelter.

Those supplies included a stick pole that would allow her to safely administer a sedative to tranquilize the animal.

“We got on scene and it really was true. It’s really a bobcat stuck in the front of a Prius grill,” Peters said. "When we walked by, he hissed at us, so he’s alive and may be OK, which was so crazy since she drove from Gloucester to VCU.” 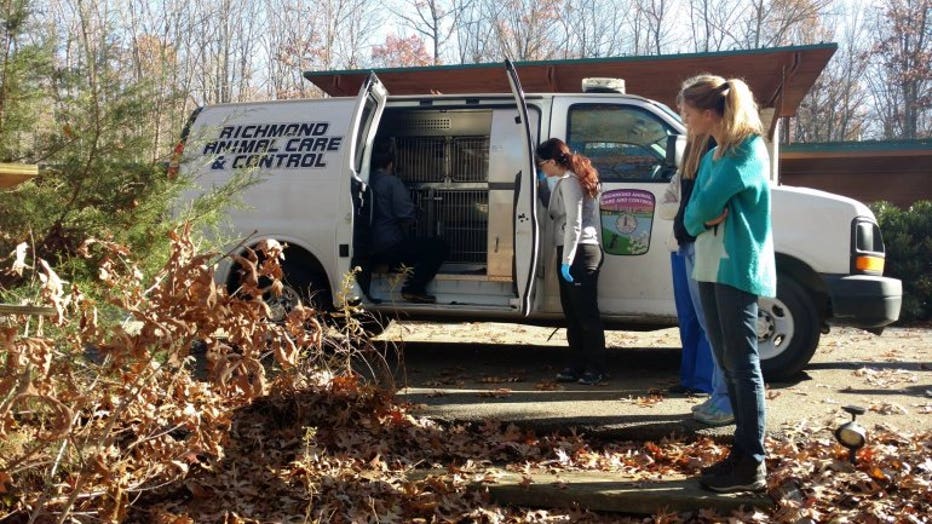 Peters then sedated the animal, which had been wedged into the grill, and within four minutes the big cat was “pretty much out.”

“And as he started to go limp, he started to drop a little bit lower,” Peters explained. “And really, in reality, the only thing holding him up was a wire… to his underbelly and one plastic piece under his ribcage.”

Peters said the trio loosened and moved the plastic components and pulled the wire before the bobcat dropped under the vehicle.

“And he was completely fine,” Peters said. “It’s insane.” 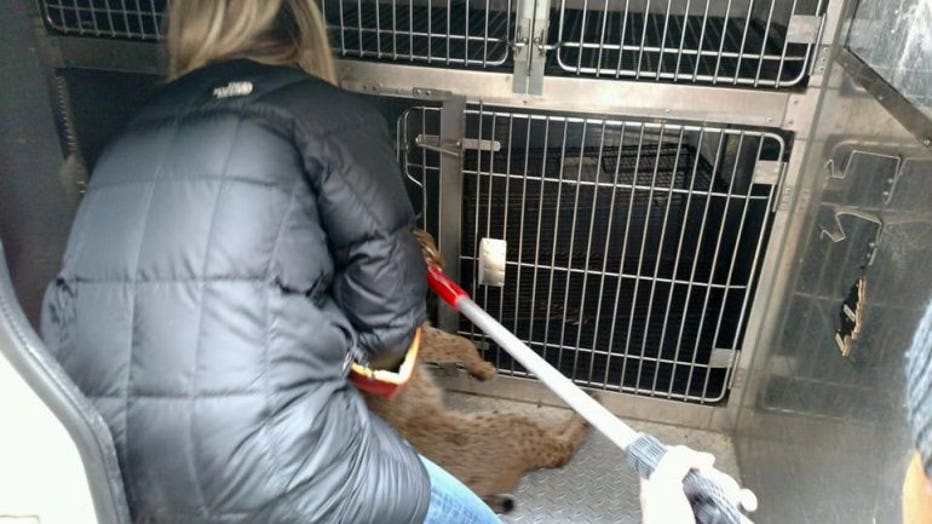 Peters carries the bobcat to a cage in the van.

Officer Jones used a catch pole around the animal’s neck as a precaution while Peters carried him to their van.

“I’ve only ever seen one once in real life like running across a road somewhere,” Peters said. “We just don’t ever get a chance to be so close to such beautiful, wild creatures and it was just wonderful to know that he made it through such a weird, crazy situation.”

Peters examined the animal for injuries, including checking his limbs for fractures, but said the big cat only suffered a minor cut on his back. 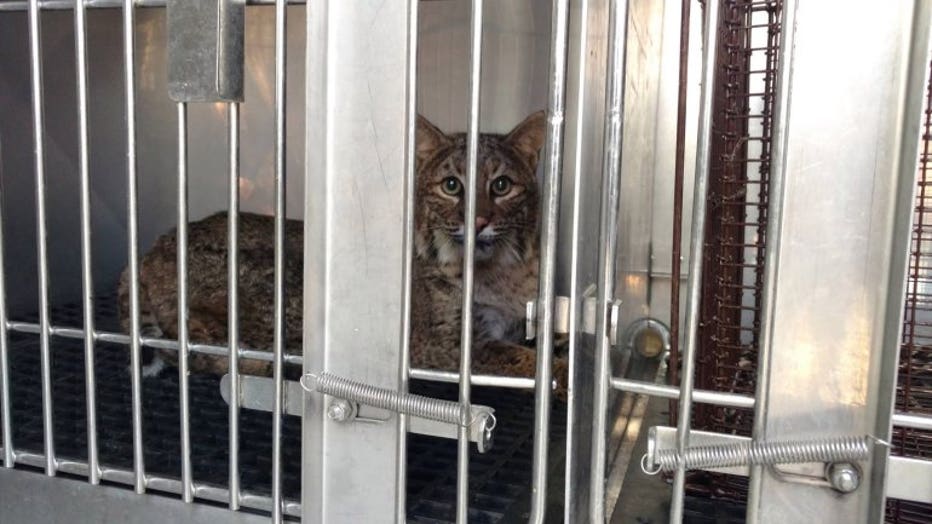 The bobcat resting at The Wildlife Center of Virginia in Waynesboro.

Just to be on the safe side, Officer Jones transported to the animal to the Wildlife Center of Virginia in Waynesboro.

“They were incredibly wonderful and helpful,” Peters said.

Officials said the animal will eventually be released back into the wild near the crossroads where he was hit in Gloucester.

“Animal Control is so funny, you never know what you’re going to walk into," Peters said. “It’s perfect that it was Thanksgiving… because it was just a miracle and we’re so grateful that it ended the way that it did.”