Seattle-based company has eyes in the skies globally

SEATTLE - With more than a dozen satellites watching from above, a Seattle-based company is on the cutting edge of what's possible from space.

BlackSky satellite company said it is capturing earth's images faster than ever before, allowing people to monitor what's happening around the world in real-time.

While BlackSky's headquarters are located in a quiet building in the Lake Union neighborhood, its eyes in the sky are having a global impact. The company can track just about anything, from shipping and supply chain struggles, to wildfires and weather events.

The striking images of Russia's war on Ukraine are just the latest use of the innovative technology. The satellites have been documenting the war since it began, sending back some of the first images of the fighting.

"We have one of the largest constellations of high-resolution satellites in the world," said Amy Minnick, BlackSky Chief Commercial Officer.

From high above the earth, BlackSky's satellites captured images like a home improvement store engulfed in flames in Ukraine. 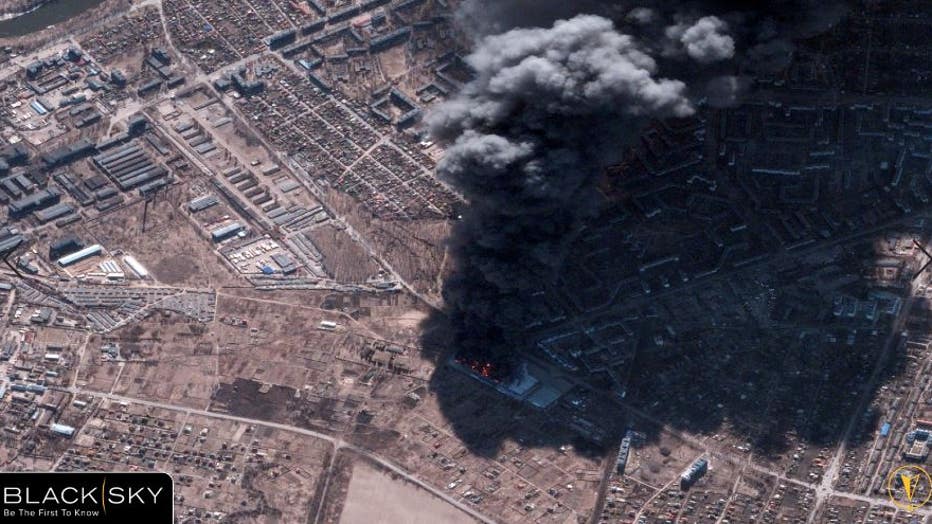 Other images show a warehouse that was destroyed during the war with Russia, and before and after images of an oil depot that was hit.

"The Antonov Airfield has been under constant attack. That was where the largest plane in the world was stored," said Minnick.

Images of a power plant under fire also helped to put the world on notice that the war had begun.

"At the very beginning of the crisis, we captured a power plant being attacked," said Minnick.

Images also show refugees queuing up in long lines of buses to cross the border. 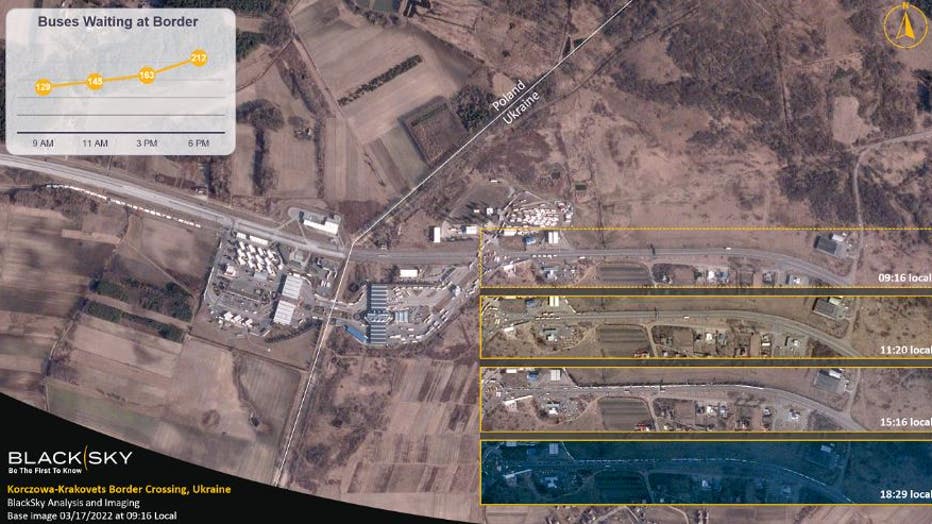 "That is very valuable for a humanitarian organization," said Minnick.

The satellites in the fleet also allow for dawn to dusk coverage, as noted in an image taken of shelling at a thermal power station in Ukraine.

The company is also providing a look at the future of business and public safety.

"We can take an image of the same location up to 15 times a day," said Minnick.

The satellites provide fast images and data within 90 minutes of a request.

"It’s the pace of change and how we have to be poised to adapt that," said Nick Merski, BlackSky Chief Operations Officer.

An artificial intelligence and analytics platform then determines what has changed over time.

While headquartered in Seattle, the satellites are built at "partner" company LeoStella in Tukwila.

"Our generation 2 satellites are about the size of a mini-fridge," said Breanne Tuttle, Director of Production at LeoStella.

After the satellites are produced in Tukwila, they're given colorful names, like Rocky and Bullwinkle, and then are shipped to places like New Zeland for launch.

"If we have everything in house, like a pile of parts, we can go from a pile of parts to a completed satellite out the door in, like, 12 weeks," said Tuttle.

BlackSky's satellites keep track of supply chains, recently capturing backups in the ports of California and the Suez Canal.

"When you  can see that ship is still in port and you are depending on that ship to get to this plant, and it’s not there, then that’s really, really helpful to commercial customers," said Minnick.

The satellites can also follow natural disasters like wildfires.  "They talk about the first 2 hours, identification, in some of those being the most critical," said Merski.

The company also monitors weather events, like the storm damage following a tornado in Mayfield Kentucky and a tornado that destroyed a warehouse in Illinois.

"That’s one of the biggest areas as we kind of continue to be amazed by, is the new problems we are asked to solve," said Merski.

With all the global applications, Tuttle and Merski explained why the company calls the greater Seattle area home.

"The Pacific Northwest has always been an aerospace hub, you know. With Boeing, starting out here and then it’s just a great area for engineering talent," said Tuttle.

"You combine that with what Seattle has done for the world in terms of cloud computing and things like that. Those are both talent pools that we really need to have in our company," said Merski.

There are currently 14 satellites in the fleet.  After the latest was launched a few weeks ago, BlackSky's Pauly Cabellon said the company was able to take photos and deliver images of Ukraine within 12 hours.  He says that's an incredibly short turnaround time to get a satellite up and running in a specific spot.