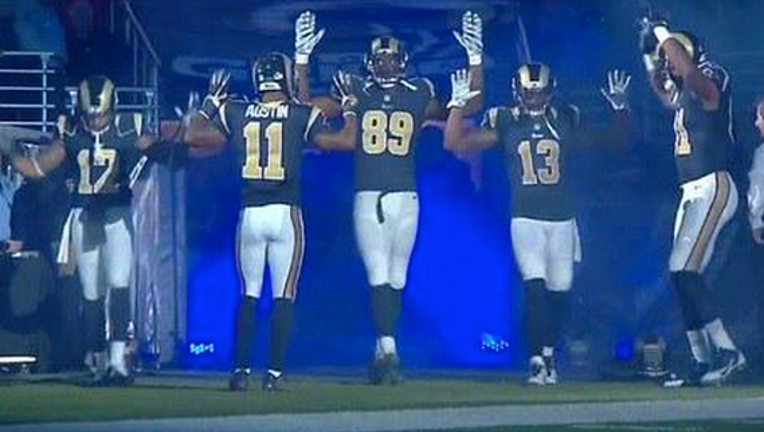 "We think that their actions were commendable and that they should not be ridiculed, disciplined or punished for taking a stand on this very important issue which is of great concern around the world and especially in the community where these players work," the Ethical Society of Police of St. Louis said in a statement this week.

The group has about 220 members from the city's police force in its ranks, the society's general counsel, Gloria McCollum, told CNN Wednesday. It describes itself as "the primary voice of African-American police officers in St. Louis city."

Earlier this week the St. Louis Police Officers Association said it was "tasteless, offensive and inflammatory" when five Rams players who walked onto the field Sunday displaying the "hands up, don't shoot" gesture adopted by protesters.

The association's business manager, Jeff Roorda, demanded that the players be punished and that the team issue a "very public apology."

"I'd remind the NFL and their players that it is not the violent thugs burning down buildings that buy their advertiser's products," Roorda's statement said. "It's cops and the good people of St. Louis and other NFL towns that do. Somebody needs to throw a flag on this play. If it's not the NFL and the Rams, then it'll be cops and their supporters."

The St. Louis Metropolitan Police Department has nearly 2,000 employees, according to its website. About 30% of the department's commissioned officers are African-American, the society says.

The Ethical Society of Police's statement said it "completely supports the actions of the St. Louis Rams football players in which they showed support for the family of Michael Brown by entering the stadium with their hands up."

A representative from the St. Louis Police Officers Association did not immediately respond to a request for comment.

The Rams declined to discipline the players or issue an apology, but the team sent a representative to speak with police. On Monday, St. Louis County Police Chief Jon Belmar claimed he had received an apology. The team denied it ever said sorry.

The players said they weren't trying to stir up trouble so much as show their support for the suburb just north of the city where they play.

That doesn't sit well with the St. Louis Police Officers Association, which still wants its apology.

Cedric Alexander, president of the National Organization of Black Law Enforcement Executives, said his organization isn't taking a side on the matter.

"The bigger issue is healing as a community and nation and moving forward," he said.

Alexander, who's also police chief in DeKalb County, Georgia, said he hopes the Rams and the St. Louis police associations "can all get together to promote a sense of community that will be a role model for what we need to do together going forward in St. Louis, across the country and around the world."