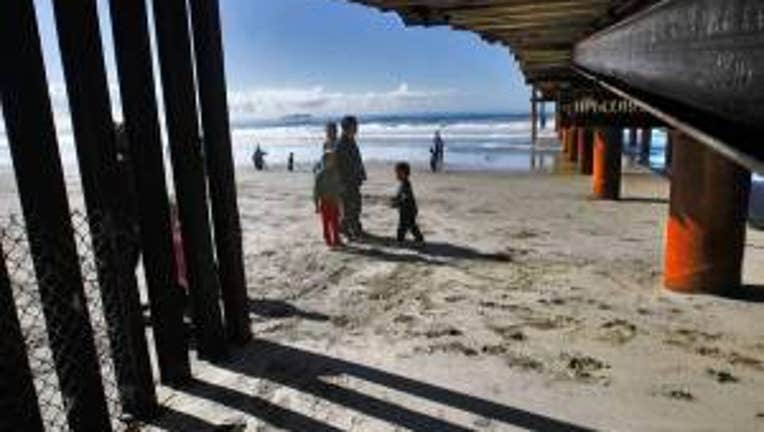 A pier in Imperial Beach, Calif., marks part of a new border fence extending farther into the surf line. Stemming the tide of illegal border-crossings is a key part of a Senate blueprint for immigration reform. (Don Bartletti, Los Angeles Times / Nov

WASHINGTON -- Millions of undocumented immigrants would get immediate but provisional status to live and work in America under a compromise plan proposed Monday by a bipartisan group of eight senators.

Only after those steps occurred could the undocumented immigrants already in the country begin the process of getting permanent residence -- green cards -- as a step toward citizenship, the senators told a news conference.

The outline for a possible immigration bill reflects a new willingness by mainstream Republicans to compromise following their party's defeat in November, when President Barack Obama got strong backing from Latino voters.

"Elections, elections," answered Sen. John McCain of Arizona, a veteran of past immigration battles in Congress, when asked to explain the push now for a bill that proved unattainable two years ago.

His party and all Americans now realized that "we cannot continue as a nation with 11 million people residing in the shadows," McCain added.

Florida Sen. Marco Rubio, a tea party backed conservative considered a rising star in the party, said the goal was to create a "modern immigration system" that treated everyone fairly -- both the undocumented and those waiting to come to America legally.

"None of this is possible if we don't address the reality there are 11 million people in this country who are undocumented," Rubio said.

However, another tea party backed Republican, Sen. Mike Lee of Utah, objected to the framework by his colleagues, saying the guidelines "contemplate a policy that will grant special benefits to illegal immigrants based on their unlawful presence in the country."

Other conservatives immediately voiced their opposition to what they called amnesty, a code word on the political right for providing undocumented immigrants a path to legal status.

"When you legalize those who are in the country illegally, it costs taxpayers millions of dollars, costs American workers thousands of jobs and encourages more illegal immigration," said Rep. Lamar Smith, R-Texas, who serves on the immigration subcommittee in the House. "By granting amnesty, the Senate proposal actually compounds the problem by encouraging more illegal immigration."

NumbersUSA, a group seeking to reduce U.S. immigration, called the Senate plan an attempt to "out-amnesty Obama" and said it was activating its 1.3 million members to push for congressional opposition.

Obama planned a speech in Las Vegas on Tuesday to discuss comprehensive immigration legislation, which he calls a priority of his second term.

At the White House, spokesman Jay Carney said Monday that the president welcomed the senators' framework, calling it a "big deal" because it included an eventual path to citizenship for undocumented immigrants.

"He is encouraged by the progress we have seen from members of both parties in the Senate, and looks forward to working with members of both parties to reach a point in the hopefully not too distant future where we have a bill that has bipartisan support, that is very specific, and that he can sign because it meets his principles," Carney said.