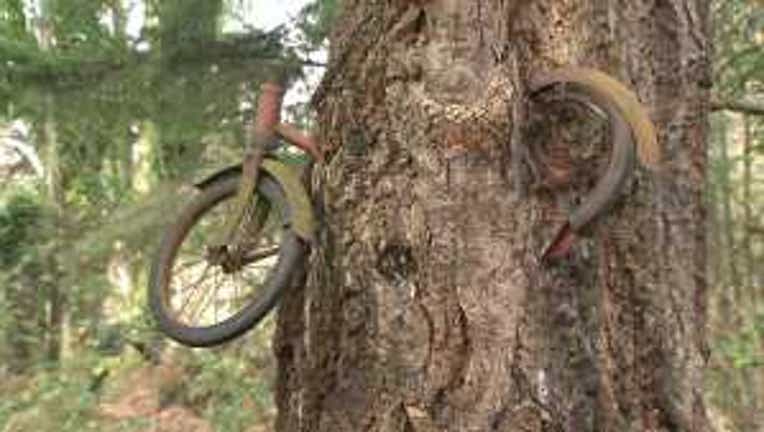 VASHON ISLAND -- Clams, tall trees and strawberries are some of Vashon Island's most recognizable attributes.

So too is one piece of folklore that has been embedded in Vashon Island's identity for more than half a century.

A child's rusty bike is implanted in a tree on Vashon Island. A few feet off the ground, the bike has had residents of Vashon Island arguing about its origin for decades. Did a child leave it right before he died of a horrible disease? Did a soldier forget the bike before going off to war? Or, did little green men have something to do with the implanted bike?

According to Jack Chambers, a Vashon Island resident, the notable bike does have an interesting history.

"As lore would have it a young boy in the early 1940s was riding his bike in the forest " Chambers said. "He leaned it up against a tree and for some reason walked away. The tree grew around it and up and away it went into the trees."

It's no surprise, Chambers said, that the bike has become something of a legend. Restaurant staff of the Red Bicycle said the bike is more than just a rusty child's toy stuck in a tree.

"I think there is magic in that bike," said resident Chris Fournier.

Fournier said the bike is a symbol of the quiet-- and sometimes quirky-- island lifestyle.

"It's why the folklore is more important than the tree," Fournier said. "It allows your imagination to grow. Who else has a bike in a tree?"